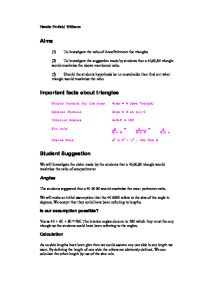 (1)        To investigate the ratio of Area:Perimeter for triangles

(2)        To investigate the suggestion made by students that a 40,60,80 triangle would maximise the above mentioned ratio.

We will Investigate the claim made by the students that a 40,60,80 triangle would maximise the ratio of area:perimeter

The students suggested that a 40 60 80 would maximise the area : perimeter ratio.

We will make an initial assumption that the 40 6080 refers to the size of the angle in degrees. We accept that they could have been referring to lengths.

Is our assumption possible?

If the size of the triangle alters will the ratio alter.

The students did not give us a length. We assumed a = 1m. Will the ratio alter if we increase the length? If we consider that the length of side a = x m we can produce a general formula for the are of a triangle with angels 40,60,80

The ratio is therefore

The important thing to see is that ratio therefore varies as or is proportional to x. So the larger we make our triangle the higher the ratio.

There is therefore no maximum ratio. The ratio simply increases as the side length increases.

For a comparison of the ratio, where we change the angles, we need to define the perimeter.

2 must be positive x2-a2 must be less than x2 hence the largest area enclosed within a quadrilateral is when a=0,  this means all four sidses are the same length. In other words this is a square.

It appears form the above that regular shapes enclose more area than non regular. From the above it would therefore be sensible to assume that an equilateral triangle, being the regular form of a triangle would enclose the most area with a set perimeter and hence produce the best ratio of area:perimeter.

An equilateral triangle has angles of 60 degrees so

Which ever way the students were thinking they were wrong. An equilateral triangle gives a better ratio than either of the ways their statement could be taken.

Perhaps the students were misheard and were not talking about triangle or even mathematics as this discussion seems remarkable unlikely. They were perhaps talking about the distance to a party or the ratio of the number CD’s that they own.

Perhaps the students should pay more attention to their mathematics teacher.