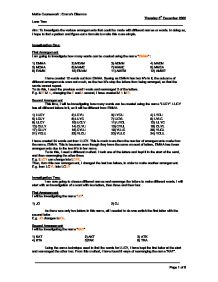 To investigate the various arrangements that could be made with different names or words. In doing so, I hope to find a pattern and figure out a formula to make this more simple.

Aim: To investigate the various arrangements that could be made with different names or words. In doing so, I hope to find a pattern and figure out a formula to make this more simple.

I am going to investigate how many words can be created using the name “EMMA” :

I have created 12 words out from EMMA. Seeing as EMMA has two M’s in it, the outcome of different arrangements were not much, as the two M’s stop the letters from being arranged, so that the words cannot repeat.

To do this, I used the previous word I wrote and rearranged 2 of the letters.

This time, I will be investigating how many words can be created using the name “LUCY”. LUCY has all different letters in it, so it will be different from EMMA.

I have created 24 words out from LUCY. This is much more than the number of arrangements made from the name, EMMA. This is because even though they have the same amount of letters, EMMA has fewer arrangements due to the two M’s in her name.

To do this, I used a different method.

I have succeeded in finding an algebraic rule for this investigation. It is quicker and more efficient to find the number of arrangements.

I am now going to be investigating words with two letters in it, the same. I will be seeing if these words will have the same amount of different arrangements as the previous investigation.

I will be investigating the name “ANN”

I was only able to create three different arrangements from the word ANN. I have noticed that there are fewer patterns in this word, than in a word with different letters.

I will be investigating the name “LILY”

Like the name EMMA in my first investigation, I have created 12 words using LILY. From the results in this investigation (ANN and LILY), I have noticed that the total of arrangements are half of those from my second investigation (KAT and RITA).

E.g. KAT(6) and ANN(3). 6 halved is 3. This is could be because ANN and LILY have two of the same letters, causing their arrangements to be halved.

To show this, I will compare the two sets of results.

Comparing the two tables, I have confirmed the fact that the arrangements made from words with two of the same letters are half or that made from words with all different letters. I can now make an algebraic equation to use, to find out the number of arrangements made with two of the same letters. Since we use n! To find out words with all different letters, all I need to do is put ½ in front of n! as it halves n! The final equation would be ½n!

E.g. To find out the arrangements made from a word with 5 letters (two of which are the same), I do:

Here is a table showing what the next few arrangements would be.

I have only been able to make one arrangement, as even if I do mix the letters around, they will all be “LLL” anyway.

I have created four words from ELLL. This is less than LUCY and LILY, which also have the same amount of letters. This is because there are fewer different letters to arrange.

I have created 20 different arrangements with the word LILLY.

In this example, I have the letters: XX and YYY. Since I have two of X, I will make that into 2! I have three of Y that I will make into 3! I will put them under 5! As that is how many letters there are. I now have:

I now need to figure out the sign in between 2! And 3! At first, I tried the additions sign.

This equation is wrong. This is because there are 10 different arrangements made from XXYYY, and not 15. So, Instead of using the addition sign, I will try using the multiplication sign.

XXYYY makes 10 different arrangements, and the formula shown above proves it.

Here are other formulas for what might be the next arrangements.

Here is a table displaying the information.

Using this information, the formula should be:

The letters in the formula, X and Y represent the letters there actually are in the word. So if there was six X’s in the letter, it would be 6! I am sure this is the correct formula to work out the arrangements for this particular arrangement.

This concludes my maths coursework on word arrangement. Overall, I have learnt that there are easier ways of working out how many different arrangements a word can be made out of. I have found that doing this without a formula, or a rule, is much longer than doing it with a formula. I have also learnt how to find out formulas quickly and work out if they are right or not.