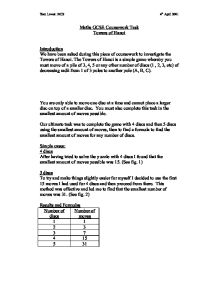 We have been asked during this piece of coursework to investigate the Towers of Hanoi. The Towers of Hanoi is a simple game whereby you must move of a pile of 3, 4, 5 or any other number of discs (1, 2, 3, etc) of decreasing radii from 1 of 3 poles to another pole (A, B, C).

You are only able to move one disc at a time and cannot place a larger disc on top of a smaller disc.  You must also complete this task in the smallest amount of moves possible.

I noticed that all the differences were powers of 2.  From this I predicted that the formula, needed to find the smallest number of moves from any number of discs, would somewhere involve the powers of 2.

From the results in this table where 2

For example, if we use 5 discs.

Upon revisiting my first formula I discovered that it was a repeating sequence whereby 2m was the first in the sequence. The next term in the sequence would therefore be 2m + 1.  This turned out to be an iterative procedure where the output of a calculation would be the input for the next calculation and the sequence could be repeated again and again.

This could be shown using nth terms as well.

From the results that I collected I was able to produce two formulas which enabled you to find the next amount of moves using either the previous amounts of moves or the number of discs.  The first formula I produced I did so with the help of iterative procedures.  The second formula I produce using the powers of 2.