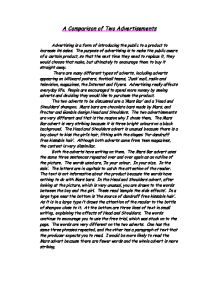 A Comparison of Two Advertisements.

A Comparison of Two Advertisements Advertising is a form of introducing the public to a product to increase its sales. The purpose of advertising is to make the public aware of a certain product, so that the next time they need to replace it, they would choose that make, but ultimately to encourage them to buy it straight away. There are many different types of adverts, including adverts appearing on billboard posters, football teams, 'Junk' mail, radio and television, magazines, the Internet and flyers. Advertising really affects everyday life. People are encouraged to spend more money by seeing adverts and deciding they would like to purchase the product. The two adverts to be discussed are a 'Mars Bar' and a 'Head and Shoulders' shampoo. Mars bars are chocolate bars made by Mars, and Procter and Gamble design Head and Shoulders. The two advertisements are very different and that is the reason why I chose them. The Mars Bar advert is very striking because it is three bright colours on a black background. The Head and Shoulders advert is unusual because there is a boy about to kiss the girl's hair, fitting with the slogan: 'for dandruff free kissable hair'. Although both adverts came from teen magazines, the content is very dissimilar. ...read more.

The logo is quite small and near the bottom of the page. I think it is important to the advert because if there were no logo, I would not know what the advert was trying to convey. There is a picture of a Head and Shoulders bottle on the second advert, which is on the girl's hair. After looking at the whole picture, I immediately saw the bottle. The bottle is medium sized and very visible, because it contrasts with the colour of the girl's hair. It is important to the advert as a whole. I think the Mars advert sends out a stronger message because it is rather intriguing and the picture has nothing to do with the product. The second advert is more obvious that it is advertising a hair product. In the first advertisement there is a girl standing at the mirror, looking at her dress. In the hair advert there are two characters, whose relationship are obviously girlfriend and boyfriend. We pick this up because the boy is about to kiss his girlfriend. The two stories are very different. In the first advert there is a girl trying on a dress and she is looking in the mirror, deciding whether to buy it. ...read more.

The second advert motivates its audience by helping you to realise that boys find girls more attractive if they do not have dandruff. Personally, I would feel much more inclined to look closely at the Mars bar advert, because it is totally unique. It is very striking and intriguing, so I would stop to read the text. I think it is so unusual because of the contrast of the background colour and the writing. I would not, however be encouraged to buy a Mars bar, as I do not like them, so my view is biased. Although I find the Head and Shoulders advert relatively boring and samey, I would be more encouraged to buy the product because dandruff free hair is very appealing. After noticing the Head and Shoulders advert, I would not read the words because the picture does not interest me. In conclusion, I would assume that the Head and Shoulders advertisement would be the more successful one, because youngsters are more impressionable than adults. This particular Mars bar advert might appeal to teenagers, because it is showing a thin girl who has remained thin even after eating a Mars bar. Many teenagers do not eat chocolate because they are worried about their figure, so this advert is intended to encourage them. In my opinion, although the Mars advert would get noticed more, the Head and Shoulders would be the most successful. ...read more.