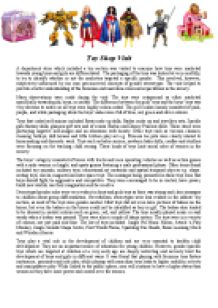 A department store which included a toy section was visited to examine how toys were marketed towards young boys and girls are differentiated.

﻿Toy Shop Visit A department store which included a toy section was visited to examine how toys were marketed towards young boys and girls are differentiated. The packaging of the toys was looked at very carefully, to try to identify whether or not the marketers targeted a specific gender. This involved, however, subjectivity influenced by our own preconceived concepts of gender stereotypes. The visit helped to provide a better understanding of the feminine and masculine roles and expectations in the society. Many observations were made during the visit. The toys were categorized as either marketed specifically towards girls, boys, or neither. The difference between the girls? toys and the boys? toys was very obvious to notice as all toys were highly colour-coded. The girl?s aisles mainly consisted of pink, purple, and white packaging while the boys? aisles were full of blue, red, green and silver colours. ...read more.

shape-sorting toys, clocks, magnets and outer space toys. The messages being promoted in these toys were that boys should fight, be aggressive and competitive. They were encouraged to be in control, have power, build new worlds, use their imagination and be creative. Stereotyped gender roles were very evident in boys and girls toys as there was strong and clear messages to children about group differentiation. Nevertheless, stereotypes were less evident in the infants? toy section, as most of the toys were gender-neutral. Most toys did not even have pictures of babies on the boxes, but even the babies on the boxes could not be identified as boy or girl. The babies also tended to be dressed in neutral colours such as green, red, and yellow. The toys mostly played music or said words when a button was pressed. ...read more.

It is widely accepted that children play with toys that has long-term consequences for later development. In particular, girls get to play with toys that are clearly linked to the private sphere while boys? toys are related to the public sphere. Unfortunately, sexism in society is exposed through children?s toys which are highly stereotyped. A resolution for this is to allow children play to choose their own toys and introduce them more to the gender-neutral toys. Toys are vital tools that help foster the mental, physical, emotional and social development of boys and girls. Toys are basic instruments for the development of children?s fantasy, thoughts and creativity. Outdoor baby toys support the right to play in childhood which is essential to healthy child development. Children gain a strong foundation for learning through play. Playtime is fun. Young children love to explore and discover new things about the world around them and about themselves. ...read more.