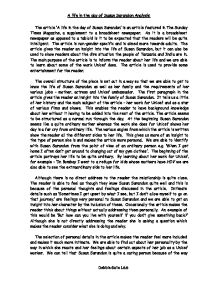 A life in the day of Susan Sarandon - Article Analysis

The article 'A life in the day of Susan Sarandon' is an article featured in The Sunday Times Magazine, a supplement to a broadsheet newspaper. As it is a broadsheet newspaper as opposed to a tabloid is it to be expected that the readers will be quite intelligent. The article is non-gender specific and is aimed more towards adults. The article gives the reader an insight into the life of Susan Sarandon, but it can also be used to show readers about the dire situation the people of Tanzania and India are in. The main purpose of the article is to inform the reader about her life and we are able to learn about some of the work Unicef does. The article is used to provide some entertainment for the reader. The overall structure of the piece is set out in a way so that we are able to get to know the life of Susan Sarandon as well as her family and the requirements of her various jobs - mother, actress and Unicef ambassador. The first paragraph in the article gives the reader an insight into the family of Susan Sarandon. It tells us a little of her history and the main subject of the article - her work for Unicef and as a star of various films and shows. ...read more.

Another example of the reader being able to see her character is when she says to the people of Tanzania 'I'm really important' and then goes on to say 'I'm a female basketball star'. She is joking with them showing the reader that she is aware of people's feelings and likes to make them feel valued and included. The tone of the article is informal and this is conveyed by the use of colloquial language, for example, the use of 'kids' rather than children. The use of conversational language makes Susan Sarandon seem more real as opposed to an untouchable film star. The tone of the article is serious in places; 'One woman began crying when I was talking to her'. Because the subject is serious a more serious and formal tone is adopted. Overall the tone is quite light-hearted and there is some sarcasm involved, an example of this would be ' I start to see my words coming out in bubbles'. The reader knows she isn't being serious but it makes the tone of the article less formal and makes her seem more familiar, we feel as though we know her more intimately. The use of the 1st person personal pronoun - 'I', makes the article much more personal and makes it possible for the article to contain intimate thoughts and feelings, the use of the 1st person possessive pronoun - 'my', also gives a more intimate knowledge and understanding of Susan Sarandon. ...read more.

The first is the large picture of Susan Sarandon in the centre of the page. Readers who have seen her films and shows would be interested to know why she is pictured with, what look like, needy children. Instantly the audience is aware that this article is not about Susan Sarandon in her familiar world of films and stardom. The two huge sets of speak marks at the beginning and end of the article attract the reader because we think the article will be her own words and feelings, something not often found in the media! The quote underneath the picture 'My own kids are so healthy and cherished that it's almost shocking' back up the idea that this article is written as though Susan Sarandon is writing it herself. It involves her private life which is something not a lot of people would know about and may be interested in. The quote also creates a feeling of mystery as the reader may wonder why she finds it almost shocking that her children are so loved and healthy. Through various linguistic features we are able to see some of Susan Sarandon's personality and temperament, as well as her feelings and thoughts on various aspects of her life. The grammar, tone and selection of detail give us an insight into her life and the important aspects in her life, and it is only during the span of one day. 1747 ?? ?? ?? ?? A life in the day of Susan Sarandon Analysis Debbie Guile L6.6 ...read more.