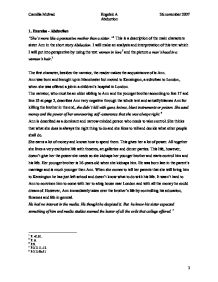 Abduction - an analysis and interpretation of this text which I will put into perspective by using the text women in love.

1. Exercise - Abduction "She's more like a possessive mother than a sister."1 This is a description of the main characters sister Ann in the short story Abduction. I will make an analysis and interpretation of this text which I will put into perspective by using the text women in love2 and the picture a man's head in a woman's hair.3 The first character, besides the narrator, the reader makes the acquaintance of is Ann. Ann was born and brought up in Manchester but moved to Kensington, a suburban to London, when she was offered a job in a children's hospital in London. The narrator, who must be an older sibling to Ann and the younger brother according to line 17 and line 35 at page 2, describes Ann very negative through the whole text and actually blames Ann for killing the brother in the end, she didn't kill with guns, knives, blunt instruments or poison. ...read more.

She almost encourages him to drink. Although he wanted to avoid this ritual his sister dragged him into it. As the world left one century and entered another he was crying. His sister's hopes were high. He was getting better. Back to normal.6 At the millennium evening he has been sober for almost a year. He wishes he could start over, run back to his mother and father or begin a new life with Marianne and his daughter. But when the people join hands for Auld Lang Syne Ann makes him drink. He is not strong enough to tell her to mind her own business and let him pass the ritual. He is crying because he knows he is under her control and he starts drinking again. In some way the narrator is right it is Ann who kills her brother by strangle him with her possessive attitude. This is also emphasized by the title Abduction. ...read more.

The difference between fiction and non-fiction is very clear in the two texts Abduction and Adler's Psychoanalytical Ideas on Development.8 Although Abduction seems very realistic the reader feels free to read it from a literary point of view probably because most people know the genre of short stories is fictional. Should Abduction be read as non-fiction the reader had to be critical and start ask questions such as, is there really a paediatrics doctor called Ann in London? And is it legal for a boy on 16 years to move away from his parents without any intervention from the law? By reading it as fiction all these question are avoided. The reader, however, has to be critical of the text Adler's Psychoanalytical Ideas on Development what is Adler's evidence for his statements? So fiction differs to non-fiction by give the reader more freedom to read and enjoy instead of being critical and call the statements in question. 1 P. 4 l.81. 2 P. 6. 3 P.9. 4 P.2 ll.11-12 5 P.3 ll.50-51 6 P5.ll. 126-127. 7 P.6 l.8 8 P.8. ?? ?? ?? ?? Camilla Mulvad Engelsk A 26.november 2007 Abduction 1 ...read more.