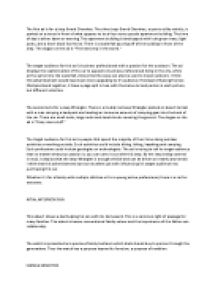 ﻿The first ad is for a Jeep Grand Cherokee. The silver Jeep Grand Cherokee, a sports utility vehicle, is parked on a street in front of what appears to be a four story upscale apartment building. The time of day is either dawn or evening. The apartment building is landscaped with lush green trees, light posts, and a short black iron fence. There is a waterfall pouring off of the building in front of the Jeep. The slogan on the ad is ?The best Jeep in the world.? The target audience for this ad is business professionals with a passion for the outdoors. The ad displays the sophistication of the car to appeal to business professionals living in the city, while at the same time the waterfall, shows that the Jeep can also be used to travel outdoors. I think this advertisement would have been more appealing to it's audience if instead of having the two lifestyles blend together, it have a page split in two with the same car and person in each picture, but different activities. The second ad is for a Jeep Wrangler. There is a muddy red Jeep Wrangler parked on desert terrain with a man carrying a backpack and loading an immense amount of camping gear into the back of the car. There are small rocks, large rocks and dead shrubs covering the ground. ...read more.

The suit implies a successful businessman (Na et al. 1999). This is an icon which implies he is from an upper-middle class social-economic categories AB1 (Dibb et al. 2006). This class context can mean different things to different groups. First, it can be a reference group for others in this category. It might be an aspirational group for those working up to a management position. Such junior managers might perceive purchasing the watch as an indicator that they have reached this social class. The father here might also appeal as a role model. He is both attractive and well dressed, implying a successful life. He also has a son who is presumably not an unruly problem child. Therefore the father acts as a well-dressed, wealthy man with a bond between himself and his son. By purchasing the watch others might also perceive themselves to have this success. Use of Colour This advert uses grey and black to convey its message. Grey, when not overused, symbolises two things. The first is the practicality and timeless (Tutssel 2000). The second is education and learning (Madden et al. 2000). All of which are well reflected in other aspects of the advert. The black in the advert represents status and power (Tutssel 2000; Madden et al 2000). SYNTACTICS Proxemics Note (11) shows the two figures in the advert are very close, the child leaning over his work and the older figure watching and/or helping him. ...read more.

It would probably be easier though to classify legacy as part of Maslow's (1943) self-actualisation bracket. Regardless, there is a clear attempt in the advert to appeal to men who want to create their own legacy. Separatism "Begin your own tradition" in note (6) implies separatism from society. This separatism makes it acceptable, in a society increasingly conscious about pursuit of material possessions (McLarney and Chung 1999), to purchase an expensive watch. This isn't a purchase for a single individual; it's a timely purchase for the benefit of the whole family. Individualism There is also an individualistic appeal "Begin your own tradition". This advert appeals to men within the nuclear family defined by Greenhalgh (2002). This advert is strongly orientated to idealistic family values. Collectivism Notes (9) shows how the advert also works in a collectivist culture. Collectivism, whereby the wellbeing of the group supersedes the wellbeing of the individual (Yeniyurt and Townsend 2003), is inferred by encouraging the individual to look after a watch (at his expense) for the wellbeing of his group. Cognitive dissonance The words "you never actually own a Patek Philippe" also reduce cognitive dissonance. Cognitive dissonance is often experienced after an expensive purchase (Lindsey-Mullikin 2003). After spending a considerable amount to purchase the watch the buyer might experience feelings of regret and guilt. However this potential cognitive dissonance is avoided with the knowledge that he does not own the watch, he looks after it for his son, ...read more.