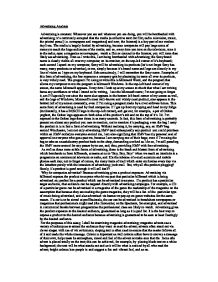 Advertising Analysis Advertising is constant. Wherever you are and whatever you are doing, you will be bombarded with advertising; it's commonly accepted that the media (a collective term for film, radio. television, music, the printed press [ i.e. newspapers and magazines] and now, the Internet) is a key part of our modern day lives. The media is largely funded by advertising, because companies will pay large sums of money to reach the huge audiences of the media; and so, every time you turn on the television, tune it to the radio, open a magazine or newspaper, watch a film or connect to the Internet, you will more than likely see advertising. Even as I write this, I am being bombarded with advertising; the Sony brand name is clearly visible all over my computer; on its monitor, on the top-left corner of it's keyboard; each second I spend on my computer, Sony will be advertising its products (let's not forget Sony has many, many products to advertise), to me, simply because it's brand name and logo are directly in my line of vision as I type on my keyboard. Sub-consciously, I will remember the Sony name. Examples of this form of advertising, the free exposure a company gets by plastering its name all over its products, is very widely used. The program I'm using to write this is Microsoft Word, and the program that allows my computer to run the program is Microsoft Windows. In the top-left hand corner of my screen, the name Microsoft appears. Every time I look up at my screen to check that what I am writing bares any semblance to what I intend to be writing, I see the Microsoft name; I'm not going to forget it, am I? Especially not since the name also appears in the bottom left hand corner of my screen as well, and the logo of Windows, Microsoft's most well-known and widely used product, also appears in the bottom left of my screen constantly, even if I'm using a program made by a rival software house. ...read more.

Clearly, the the use of the word'just' before a sum which is out of the question for many's holiday budgets shows that the audience are higher earners, especcialy when one considers the fact that is the starting price, the minimum amount needed for a cruise. The target audience of the Scotland advert is most probably either young couples or slightly older couples wnating to revive lost romance with a cosy break; the use of an embraci ng couple confirms this. The Medderanian cruise holiday's target audience will most probably be either couples or groups of friends who want to get away from it all and enjoy travelling, and are prepared to pay for the luxury of the cruise; herein lies the motive for buying the product; the luxury which is assured by the price tag and also the built up image of the brand name ensure that the reader of the magazine, if he or she wants luxury, will choose this product over others; the advert even uses it's brand name's history of reliability The two adverts differ hugely in their use of pictures or photos; the advertisement for meditation cruises uses the scenery of the Mediterranean to try and demonstrate the beauty of the area; the picture entices the potential reader into reading the text with its stunning nature; it leaps out of the page at you because of the breathtaking nature of the scenery; in contrast, the Scottish highlands advert the picture is secondary; the use of lilac or mauve shades of purple (i.e. colours which don't leap out at are by their nature gentle) makes the text (which is a white, which glaringly stands out) seem the key focus for the reader. Because the Scottish highlands do not have a reputation which is desirable to the advertisers, there are a variety of techniques used to dispel it. Typically the Scottish highlands are thought to be remote and behind the times, with nothing to offer the modern person; the use of a couple ho are clearly young tries to dispel that image. ...read more.

phrases to give it a chic, modern air. The text stands out because of its position on the page and the sentences lead sraight on into each other. The other body of text is small and secreted away so as not to detract from the all-important picture; the phrase 'make your own entertainment' makes use of innuendo and gives a certain allure to coming to the coming to the Scottish Highlands; the useof aquestion directly followed by an answer ('Want to come? Go online.') points a reader where to go without giving him or her time to think; it's almost s if he or she as nochoice. Those last two sentences are also short and snappy, as is the 'tag' visitscotland.com, which is is easy to remember andstresses that you shoud visit Scotland; the use of an incomplete andshort address rather than a longwinded one also keeps up the modern theme (by missing off the http:// and www. sections of the website address and using something catchy like visitscotland.com and not something like uktourism.co.uk/scotland/highlands/visit_scotland.html the shot and snappy nature of the text is kept going and it is also a stylish ddress.). In conclusion, this study has shown how two adverts selling he same product (holidays) and aimed at a simmilar demographic (high-earning Times readers) can be vastly different. Whilst the Swan Hellenic advert relies on showcasing and using a built up image of the Medetteranian and the reputation of P&O cruises the Scottish Highlands advert tries relentlessly to dispelpreconceptions about the Scottish Highlands through the use of modern colours, the internet, short, snappy phrases and a modern sense of humour. In my opinion, the Swan Hellenic is more successful becauseit has a built up image to rely on and fall back on and so the product is easier to sell throgh visual showcasing and the use of language techniques (,etaphor in 'like a beacon in the sun' rheotorical questions), and the conotations of the swan and Helen of Troy to sell it's product. ...read more.