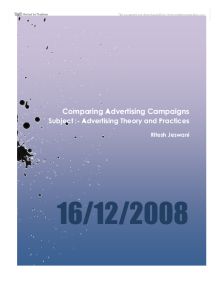 Campaign Comparison 1: - VS Volkswagen Ad Campaign: - The Van is 60 Advertising Agency: DDB, Paris, France Executive Creative Directors?: Alexandre Herv� & Sylvain Thirache Art Director: Aurelie Scalabre? Copywriter: Patrice Dumas Critical Evaluation of Advertisement: - This advertisement is part of the Volkswagen "The Van is 60" campaign. This Ad does include a hint of shock advertising not only because they mention the word shock there but also the language in which Police is written. The word police is written in German, i.e. Poizei that directly links Volkswagen vans being used by the Nazi's. Linking itself with the Nazi's is quite a bold statement by the Volkswagen, and it did successfully bring about the main message that their vans were used since ancient times. This advertisement brilliantly portrays the effect of visuals and text that bring about shock as well as information at the very same time. As much as one is mislead to believe that this is a Unique Selling Protocol, this advertisement is clearly an Emotional Selling Protocol based concept since it doesn't emphasize on any particular quality of the Van, rather it brings about information on who or since what period their vans have being used. ...read more.

The thought process of a rabbit is portrayed here which is quite casual and is describing the situation he is in where he and his girlfriend were going to be hit by a vehicle when they were crossing the road. Eventually the vehicle doesn't hit him, where the catch lies. The braking system in the Mercedes-Benz vehicle is excellent that it immediately stops the car and saves it from unfortunate encounters with road surprises. Once again the ad is quite appealing, yet the amount of text could be unacceptable by some. Critical Evaluation of Advertisement: - This advertisement is a part of the Mercedes-Benz "Road is a safer place" campaign. Here the character of a squirrel is used and a portrayal of his thoughts is made before he believes that he is going to be run over by a vehicle. His thoughts jump over excitedly from one corner to another showing the amount of anxiety he is going through. This advertisement is a yet another neat attempt to show how the Mercedes-Benz vehicle stopped in front of an unexpected road surprise thanks to its excellent braking systems. ...read more.