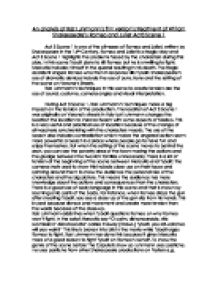 An analysis of Baz Luhrmann's film version's treatment of William Shakespeare's Romeo and Juliet Act3 Scene 1 Act 3 Scene 1 is one of the climaxes of Romeo and Juliet, written by Shakespeare in the 16th Century. Romeo and Juliet is a tragic story and Act 3 Scene 1 highlights the problems faced by the characters during this play. In this scene Tybalt plans to kill Romeo but he is unwilling to fight. Mercutio includes himself in the quarrel resulting in his death. The tragic accident angers Romeo who then in response kills Tybalt. Shakespeare's use of dramatic devices include the use of puns, irony and the setting of the scene on Verona's Streets. Baz Luhrmann's techniques in this scene to create tension are the use of sound, costume, camera angles and visual interpretation. During Act 3 Scene 1, Baz Luhrmann's Techniques make a big impact on the tension of the production. The location of Act 3 Scene 1 was originally on Verona's streets in Italy but Luhrmann changes the location the location to Verona Beach with some aspects of Mexico. This is a very useful and practical use of location because of the change of atmosphere synchronising with the characters moods. ...read more.

In this scene Shakespeare builds up tension by setting the scene on Verona streets on a hot afternoon. Luhrmann continues this idea by setting it at midday. The Montagues look prepared for the heat with their loose Hawaiian shirts. The Capulets are wearing tight, black, formal clothes. Mercutio's costume is a mixture of both houses because he is wearing a formal shirt but the buttons are un-done so he is comfortable for the weather. Luhrmann uses this technique so it is easier for the audience to understand the association of the heat and anger. The grudge between Montagues and Capulets goes back many years ago and Shakespeare hints it to being on religious grounds. Luhrmann expands on this idea. The Montagues are shown as a Central American family while on the other hand the Capulets are shown as Mexican. Once again Mercutio doesn't come into any of these two categories; he is shown as an African American which is the same as the Prince, his uncle. Mercutio is shown different to both Montague and Capulets because he is not on any side and doesn't let the grudge change any of his plans. Luhrmann has taken into mind religion being one of the causes of the grudge which might be possible because in Shakespeare's life there was a lot of controversy about religion. ...read more.

These include the slicing of the glass into Mercutio and the echo of the gun dropping when Romeo shoots Tybalt. Baz Luhrmann does this so that the turning points of the scene are highlighted. Luhrmann also repeats important lines so the audience can completely understand them as shown when Romeo says "Either thou or I must go with him." Baz Luhrmann has thought bout every aspect of his movie carefully and always kept Shakespeare's script in mind and the audience of 1996 in mind. The audience would have enjoyed this movie very much and would have been able to think and understand Romeo and Juliet better than they would have if they read the script. Baz Luhrmann aimed the movie toward young adults. He did this very well as he used popular music, bright costumes for the Montagues so the audience sympathises for them. He has made Act 3 Scene 1 very fast moving and interesting but keeps the violence to a limit. Luhrmann has brought Shakespeare's script into life by adding in his own ideas and sticking to crucial parts of the play which made it more interesting. I think that Baz Luhrmann has created a wonderful scene in this movie and helped me understand the scene much better. Overall, I think it was the best interpretation of Act 3 Scene 1 I have ever seen. ...read more.