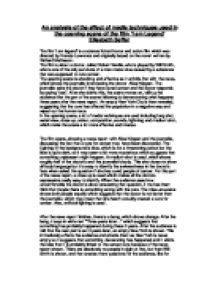 An analysis of the effect of media techniques used in the opening scene of the film 'I am Legend' Elisabeth Seffer The film 'I am legend' is a science fiction/ horror and action film which was directed by Francis Lawrence and originally based on the novel written by Richard Matheson. The film is about a doctor, called Robert Neville, who is played by Will Smith, who is one of the only survivors of a man made virus caused by a substance that was supposed to cure cancer. The opening scene is shocking and effective as it unfolds first with the news, which shows the journalist interviewing the doctor Alice Krippen. The journalist asks the doctor if they have cured cancer and the doctor responds by saying "yes". After she claims this, the scene moves on, telling the audience that the part of the scene following is demonstrating what happens three years after the news report. An empty New York City is then revealed, suggesting that the cure has affected the population in a negative way and wiped out the human race. In the opening scene, a lot of media techniques are used including long shot, aerial view, close up, colour, composition, sounds, lightning and medium shot, which make the scene a lot more effective and intense. ...read more.

After this, an aerial view is used to track a red car driving through a part of the city. Using this shot really intensifies the fact that New York is empty, as you can see all the skyscrapers and empty roads which look really lonely and abandoned. The skyscrapers are a dull gray and most of the objects and roads around them are also dull, depressing colours which might give the audience the idea that, again, something bad has happened and it also makes it seem more abandoned and alone. After this, the aerial view is replaced by a long shot, which tracks a red car speeding through the empty streets which are overgrown with weeds and grass, which again makes the audience realise all over again that the city is empty and shows that it must have been like this for quite a while in order for all the grass to grow on the roads. The red car, surrounded by all the grey buildings and roads, looks intense as it stands out a lot. Red shows danger or blood which might bring across the message that Will Smith might be in danger or that the humans who have been wiped out may have suffered a horrible death. The car is tracked whilst driving through New York and at one point a poster with a butterfly on it is shown, which wouldn't ...read more.

So he has to get back to his house as soon as possible. Overall, 'I am Legend' has a very effective and also shocking opening. A lot of media devices are used very effectively to make some parts more startling, for example the aerial view when New York is shown, which makes it seem more realistic and also shocks the audience more. The colours used are also very effective; for example the red car surrounded by the grey buildings which makes the red stands out a lot and brings across a message. The scene does foreshadow the plot quite a lot, for example when the whole city is empty, which gives a clue that the whole population probably got wiped out by the cancer cure. The opening scene of this film really does make the audience want to keep watching to see what happens as the opening creates a lot of questions about why there is only one person in New York and what happened to the whole population. Some of the parts in the opening create tension and it keeps the audience alert. The opening scene uses a good variety of shots and good lightning and it is a very good and affective opening that foreshadows the plot a bit but still leaves questions, it definitely makes the audience want to watch the rest of the film. (all the sound in the film is diegetic) ...read more.