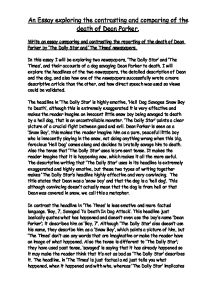 An Essay exploring the contrasting and comparing of the death of Dean Parker.

An Essay exploring the contrasting and comparing of the death of Dean Parker. Write an essay comparing and contrasting the reporting of the death of Dean Parker by 'The Daily Star and 'The Times' newspapers. In this essay I will be exploring two newspapers, 'The Daily Star' and 'The Times', and their accounts of a dog savaging Dean Parker to death. I will explore the headlines of the two newspapers, the detailed description of Dean and the dog, and also how one of the newspapers successfully wrote a more descriptive article than the other, and how direct speech was used so views could be validated. The headline in 'The Daily Star' is highly emotive, 'Hell Dog Savages Snow Boy to Death', although this is extremely exaggerated it is very effective and makes the reader imagine an innocent little snow boy being savaged to death by a hell dog, that is an uncontrollable monster. 'The Daily Star' paints a clear picture of a crucial fight between good and evil. Dean Parker is seen as a 'Snow Boy', this makes the reader imagine him as a pure, peaceful little boy who is innocently playing in the snow, not doing anything wrong when this big, ferocious 'Hell Dog' comes along and decides to brutally savage him to death. ...read more.

Again 'The Daily Star' uses this chance to maybe exaggerate what happened or uses the photograph to pull the heart strings of the reader. Both articles are obviously based around the story of Dean Parker being killed by a dog but both newspapers describe Dean in different ways. 'The Daily Star' describes Dean as 'little' and 'screaming youngster'. The word 'little' makes Dean seem all the more innocent or unable to defend himself against the dog. 'Screaming youngster' makes you imagine that he was in agony while he was being killed which an awful is thought so once again 'The Daily Star' is using emotive language. Also 'The Daily Star' describes Dean's injuries in great detail; 'huge razor-like gash' and 'neck pumping blood' are just two ways that his injuries were described. This is again using descriptive language. 'The Daily Star' uses Dean as an innocent figure in their article; this makes it all the more sad and shocking that he has been killed or 'savaged'. I think that 'The Daily Star' using Dean as an 'angel' is a very clever idea to make the reader feel even more sympathetic. In contrast, 'The Times' is very different. ...read more.