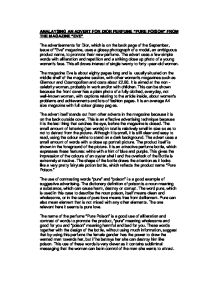 The advertisements for Dior, which is on the back page of the September, issue of “Eve” magazine, uses a glossy photograph of a model, an ambiguous product name, to promote their new perfume. The advert uses a few simple words with alliteration and repetition and a striking close up photo of a young woman’s face. This all draws interest of single twenty to forty-year-old women.

The magazine Eve is about eighty pages long and is usually situated on the middle shelf of the magazine section, with other woman’s magazines such as Glamour and Cosmopolitan and costs about £2.00. It is aimed at the non-celebrity woman, probably in work and/or with children. This can be shown because the front cover has a plain photo of a fully clothed, everyday, not well-known woman, with captions relating to the article inside, about women’s problems and achievements and lots of fashion pages. It is an average A4 size magazine with full colour glossy pages.

The advert itself stands out from other adverts in the magazine because it is on the back outside cover. This is an effective advertising technique because it is the last thing that catches the eye, before the magazine is closed. The small amount of lettering (ten words) in total is relatively small in size so as to not to detract from the picture. Although it is small, it is still clear and easy to read, using the colour white to stand on a dark background. The advert uses a small amount of words with a close up portrait picture. The product itself is shown in the foreground of the picture. It is an attractive perfume bottle, which expresses these features: white with a hint of blue and purple. This gives the impression of the colours of an oyster shell and the overlook of the Bottle is extremely attractive. The shape of the bottle draws the attention as it looks like a very pretty fairytale potion bottle, which reflects the product name “Pure Poison.”

The use of contrasting words “pure” and “poison” is a good example of suggestive advertising. The dictionary definition of poison is a noun meaning a substance, which can cause harm, destroy or corrupt. The word pure, which is used in this case to describe the noun poison, itself means clean and wholesome, or in the case of pure love means free from defilement. Pure can also mean element that is not mixed with any other elements. The one relevant here it seems is pure love.

The name of the perfume “Pure Poison” is a good use of alliteration and contrast of words to promote the product, “pure” meaning wholesome and good for you and “poison” meaning harmful and bad for you. These words together with the design of the bottle, without using much information, suggest that by using this perfume the female gender has the power to draw the wanted man towards her, but if he betrays her she can destroy him like poison. This use of these words is very clever as it contains subliminal messaging that the woman can be in control of the man she wants to attract. This can give confidence to women, who have been let down in past relationships or have been betrayed by their partners.

These contrasting words lead us into the largest part of the picture being the face of the model. It is a close up photo of a young woman around twenty years, who establishes a connection between herself and the target audience of young single women. She has snake like characteristics with one eye looking directly at the reader suggesting cunning, with other parts of her face hidden in a pool of shadow. The photo shoot was probably taken in a darkened room, with light directed to parts to been seen. This use of shadow suggests that although she may be busy doing other things (the hidden eye), she is always watching for signs of betrayal, (the shown eye). The eye is fixed on the reader and suggests the female reader using this perfume will tempt the opposite sex; and give the ability to wrap the man around her finger. The picture together with the bottle gives a sense of the pleasurable boast of toughness, not getting hurt and the power of revenge. The clothing is also dark and snake like with sequins giving the impression of scales, which are, not only snake characteristics but also reminds the reader of partying and nightclubs.

The overall impression of temptress also ties in with the magazine. Although the magazine Eve does not own Dior, in this particular case, the perfume “Pure Poison” coincidently ties in with the name Eve. Eve is the well -known name of the woman in the first book of the Bible, who tempts Adam with the apple, which destroys him and her, by disobeying God who banishes them from paradise. The Dior advert seems to draw on this story. This targets female audiences, particularly single women wanting to attract or tempt men.

The brand name is repeated three times, once on its own on the top of the page in the right hand corner, next on the perfume bottle, and then finally nearer the bottom in the sentence, “The new fragrance from Dior.” The product name Pure Poison is repeated twice with the company’s name, Dior, repeated three times. This does not annoy the reader, but reinforces the brand and product, in the memory of the reader. The layout of the text is designed for most of the writing to be at the bottom of the page, because people read from top to bottom so that will be the last thing they see, and even though there is only a small amount of writing it still gives enough information to make the right impression

Overall the advert uses persuasive techniques, which are effective in promoting the product. These include the style and pose of the model to suggest seduction and temptation, through using snake -like features and fairy tale imagery. The other main technique is the contrasting meaning of the product name and repetition of a few words used to promote the product. The techniques are combined well, with the outcome of an advertisement that is pleasing to the eye, which conveys a subtle message and will attract customers to test the product.