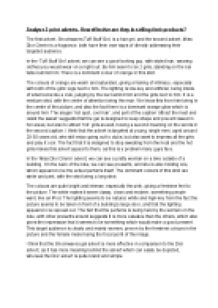 ﻿Analyse 2 print adverts. How effective are they in selling their products? The first advert, Shockwaves Tuff Stuff Gel, is a hair gel, and the second advert, Miss Dior Cherie is a fragrance, both have their own ways of directly addressing their targeted audience. In the ?Tuff Stuff Gel? advert, we can see a good-looking guy, with styled hair, wearing clothes you would wear on a night out. By him seem to be 2 girls, standing on the bar table behind him. There is a dominant colour of orange in this shot. The colours of orange are warm and saturated, giving a feeling of intimacy, especially with both of the girls? legs next to him. ...read more.

to keep shape and prevent sweat in hot areas, but also to attract ?hot? girls as well, having a second meaning on the words in the second caption. I think that the advert is targeted at young, single men, aged around 20-30 years old, who still enjoy going out to clubs, but also want to impress all the girls and play it cool. The fact that it is designed to stop sweating from the heat and the hot girls makes this advert appeal to them, as this is a problem many guys face. In the ?Miss Dior Cherie? advert, we can see a pretty woman on a bike outside of a building. ...read more.

The lighting seems to be natural, white and high-key from the fact the picture seems to be taken in front of a building?s large door, and that the lighting appears to be spread out. The fact that the perfume is being held by the woman on the bike, with other presents around suggests it is more valuable than the others, which also gives the impression that it seems to be something which would make a good present. This target audience is clearly and mainly women, proven by the feminine colours in the picture and the female model being the focal point of the image. I think that the Shockwaves gel advert is more effective in comparison to the Dior advert, as it has more meaning behind the advert which can easily be depicted, whereas the Dior advert is quite bland and simple. ...read more.