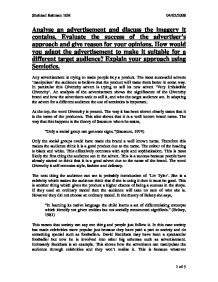 Analyse an advertisement and discuss the imagery it contains. Evaluate the success of the advertiser's approach and give reason for your opinions. How would you adapt the advertisement to make it suitable for a different target audience? Explain your appr

Analyse an advertisement and discuss the imagery it contains. Evaluate the success of the advertiser's approach and give reason for your opinions. How would you adapt the advertisement to make it suitable for a different target audience? Explain your approach using Semiotics. Any advertisement is trying to make people buy a product. The most successful adverts 'manipulate' the audience to believe that the product will make them better in some way. In particular this Givenchy advert is trying to sell its new advert 'Very Irr�sistible Givenchy'. An analysis of the advertisement shows the significance of the Givenchy brand and how the advertisers seek to sell it, and who the target audience are. In adapting the advert for a different audience the use of semiotics is important. At the top, the word Givenchy is present. The way it has been shown clearly states that it is the name of the producers. This also shows that it is a well known brand name. The way that this happens is the theory of Saussure where he states, "Only a social group can generate signs."(Saussure, 1974) Only the social groups could have made the brand a well known name. ...read more.

This has connotations of romance and how to acquire it. People are impressed with the French language and the sense of sophistication it has. People think it is a good frangrance because it has a French influence or that it is from the land of 'love'. The bottle of the perfume gives an essence of purity, exquisiteness and how '�l�gante' it is. The shape of the bottle is twisted. It is said to have evoked a unique mix of French elegance and American spontaneity. The producers call it the Givenchy 'Twist'. The colour of the bottle is the same colour as the name given to the product. They are both purple and this shows an essence of status. This colour indicates you as a rich being. Therefore this would make people think that they are rich and can boast about it. Judith Williamson had stated that, "Perfumes differ chemically from each other of course; they smell different but their promotion depends on the association of a smell with a 'social meaning'." (Williamson, 1978) Many people would like to be defined rich, so therefore in order to be indicated as rich they would have smell rich first. ...read more.

Instead she should be sitting on the bed and demonstrate how she still has a good posture and grace and that it is never too late to have some 'fun'. The position of the bottle is quite important. It should be in her hand because it shows out her status, which is rich, slim and glamorous. This would make the audience that there is still time for them to become 'sexy'. This would 'grab' the older citizens in to purchase the product. The next thing to be added is a sample of the product. This is because most senior citizens are wise and will not buy the product if they don't know what it smells like. In contrast I don't think the younger target group will have checked whether it smelt good or not. The way the sample should be presented is by having the sample where the bottle was placed in the original advertisement. This would cover up for the amount of space lost. It should be the same shape of the bottle because it will be like an exclamation mark for the three phrases written across the advertisement. Overall I think that Givenchy were really successful in 'manipulating' the target audience. However after analysing the advertisement it has made me think personally about testing the product before buying it! Shehzad Rahman 10H 04/02/2008 1 of 4 ...read more.

Overall, a sound essay which uses some semiotic analysis to assess the success of the text. More semiotics terms could be used. The suggestions for altering the target audience are mostly good. The essay would benefit from careful proofreading as it's overly wordy and slightly repetitive in places.