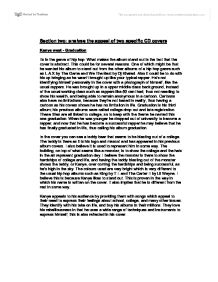 Section two: analyse the appeal of two specific CD covers Kanye west - Graduation Its in the genre of hip hop. What makes the album stand out is the fact that the cover is abstract. This could be for several reasons. One of which might be that he wanted his album to stand out from the other albums of a hip hop genre such as L.A.X by The Game and We The Best by Dj Khaled. Also it could be to do with his up bringing as he wasn't brought up like your typical rapper. He's not identifying himself personally in the cover with a photograph of himself, like the usual rappers. He was brought up in a upper middle class back ground, instead of the usual working class such as rappers like 50 cent had, thus not needing to show his wealth, and being able to remain anonymous in a cartoon. Cartoons also have no limitations, because they're not based in reality, thus having a cartoon as his covers shows he has no limitation in life. Graduation is his third album; his previous albums were called college drop out and late registration. ...read more.

I had a problem with deciding what the album would be called so I decided to base it on something which is closely related to Lil Wayne. Lil Wayne is a heavy cannabis user, and drugs have weird affects on people therefore I decided to call it red kryptonite. I decided red kryptonite because Lil Wayne is considered one of the best rappers alive, and superman is one of the best super heroes around. Red kryptonite had weird effects on him therefore I used red kryptonite as a metaphor for drugs. I also decide on kryptonite as some people consider Lil Wayne to be a bad influence on society. I decided to have the covers main colour as red as I believe it goes well with the title. I also edit a picture of Lil Wayne so he is also wearing red. He is crouched in front of a cell as some people believe he is a criminal and a bad influence and that he should be locked up. I have him crouched in front of the cell as it is sort of mocks the people who hate him. I like this as I believe it suits his personality as he likes to mock and confront people. ...read more.

Their album covers are extremely different from one another. Thriller is slick, professional and glowing in a way, whereas Graduation is in cartoon, thus seeming slightly childish. You can even tell in the way which the title is written on the albums that they are different. On Thriller the title is written in nice hand writing, in gold and it all flows. Whereas in Graduation the title is in block letters, in purple. It's the same with the artist's names. Michael's name is in gold and in nice hand writing. Whereas Kanye's is mixed, such as some are in capitals and some aren't, making it look scruffy. Although this could have been to do with the genre as Graduation is in alternative hip hop and Thriller is in pop. The colouring of the two albums is completely different as well, as Graduation is a mix of colours making it stand out and Thriller isn't. This could be due to the way in which the artists think, as explained earlier. The music is also different but that is due to the genres of music which the artists decide upon. Even though these albums are different from one another they both managed to do extremely well in sales, showing that different covers and music appeal to different people. ...read more.