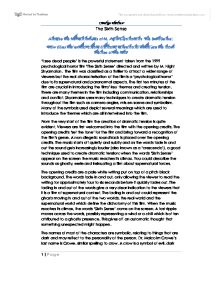 Analyse the first ten minutes of M. Night Shyamalans The Sixth Sense. How does this extract create dramatic tension and introduce the main themes of the film?

Analyse the first ten minutes of M. Night Shyamalan's 'The Sixth Sense'. How does this extract create dramatic tension and introduce the main themes of the film? 'I see dead people' is the powerful statement taken from the 1999 psychological horror film 'The Sixth Sense' directed and written by M. Night Shyamalan. The film was classified as a thriller to attract a wider range of viewers but the real characterisation of the film is a 'psychological horror' due to its supernatural and paranormal aspects. The first ten minutes of the film are crucial in introducing the films' key themes and creating tension. There are many themes in the film including communication, relationships and conflict. Shyamalan uses many techniques to create dramatic tension throughout the film such as camera angles, mis-en-scene and symbolism. Many of the symbols used depict several meanings which are used to introduce the themes which are all intertwined into the film. From the very start of the film the creation of dramatic tension is quite evident. Viewers are first welcomed into the film with the opening credits. The opening credits 'set the tone' for the film and bring forward a recognition of the film's genre. A non-diegetic soundtrack is placed over the opening credits. The music starts off quietly and subtly and as the words fade in and out the sound gets increasingly louder (also known as a 'crescendo'), a good technique used to create dramatic tension; when the words 'Sixth Sense' appear on the screen the music reaches its climax. ...read more.

Malcolm Crowe. The next scene shows Anna descending into the basement. The scene begins with a long shot of Anna from behind the wine rack. She stops and shivers at the bottom of the basement stairs showing she is feeling the cold of the secluded location. Her body language shows that she is very conscious of her new surroundings and a slight element of fear is present; while she is walking towards the wine rack the long shot of the camera view is as if someone is watching her. You can see her feeling very reluctant to be in a place in her own house, a foreboding sense. Anna moves towards the wine rack, and as she walks an echo of her footstep is heard creating a suspense filled atmosphere. When Anna reaches the wine rack, she looks up and down the rack looking for the correct wine bottle and the camera follows her eye movements with a close-up shot, once again insinuating that she is being watched by a 'ghostly' presence behind the wine rack. She grabs the wine and departs the basement quickly. Following Anna's interaction with the basement, viewers are then introduced to the sitting room. In the sitting room there is a complete change of mood; from suspense and tension to ta relieving and calm atmosphere, can be described as a step from darkness into light giving a sense of reassurance of safety. The basement scene held a lot of tension, then the sitting room scene took away all that tension giving the viewers mixed perceptions of what the film is about. ...read more.

We are also put into Malcolm's shoes as we can see the room from Malcolm's eyes. 'The Sixth Sense' uses many techniques that create dramatic tension in the film; these techniques are bought to recognition in the first ten minutes of the movie. They tell the viewers that director M. Night Shyamalan purposely did this to let them know that the element of creating dramatic tension is an important one. The most effective technique was the restricted information given. The strategy involved withholding all important information for example, where is the film set? What year are they in? Who is Malcolm Crowe? And how did he become so successful? The key themes which were all initiated in the first ten minutes added atmosphere and dramatic tension to the film. He also uses foreshadowing and motif to help you understand the movie and see that it is more than what you first perceive. The film kind of represents the light bulb from the beginning. Starting off in the dark we gradually grow into the light as the film progresses giving off more information. Especially the major shock when we find out in the end that Malcolm Crowe was actually shot dead in the beginning. Overall, 'The Sixth Sense' was a well thought of film which used several film techniques which made it one of the most famous horror movies ever made. ?? ?? ?? ?? Chiago Tabansi The Sixth Sense 1 | Page ...read more.