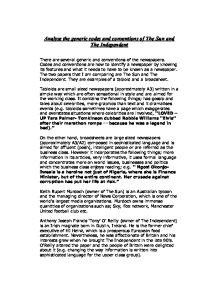 Analyse the generic codes and conventions of The Sun and The Independent There are several generic and conventions of the newspapers. Codes and conventions are how to identify a newspaper by knowing its features and what it needs to have to be known as a newspaper. The two papers that I am comparing are The Sun and The Independent. They are examples of a tabloid and a broadsheet. Tabloids are small sized newspapers (approximately A3) written in a simple way which are often sensational in style and are aimed for the working class. It contains the following things; has gossip and tales about celebrities, more graphics than text and it dramatises events (e.g. tabloids sometimes have a page which exaggerates and overstates situations where celebrities are involved, ''LOVED - UP Tara Palmer- Tomkinson dubbed Robbie Williams ''Elvis'' after their marathon romps ___ because he was a legend in bed).'' On the other hand, broadsheets are large sized newspapers (approximately A3/A2) composed in sophisticated language and is aimed for affluent (posh), intelligent people or are referred as the business class. However it incorporates the following things; more information in its articles, very informative, it uses formal language and concentrates more on world issues, businesses and politics which the business class enjoys reading; e.g. '' Ngozi Okonjo-Iweala is a heroine not just of Nigeria, where she is Finance Minister, but of the entire continent. ...read more.

The Independent has headlines written approximately and gets to the point of the situation for the reader to understand because they want them to know about the facts and not gossip or opinions, e.g. 'A deadly legacy.' In detail, the article suggests that bombs lie unexploded in Iraq and are capable of killing innocent civilians which this time after two years, Britain is finally being held in account. Thirdly, the pug (price) of The Sun is placed on the exact location of the masthead. This shows that the reader is aware of the pug whereas in The Independent is situated at the top right of the paper which causes difficulties for the reader to identify it. Moreover, the difference in price suggests the quality and size of the paper. The working class can't just buy a newspaper at high price so The Sun makes it cheaper and the size of the paper is small which will draw more people's attention whilst The Independent increases the price because they know that the business class are wealthy and don't mind if they buy the newspapers for a high price and the size of the newspapers are immense which the readers think that its worth buying. The uses of language in the two papers are exceptionally different. For the working class, The Sun has to use text that straightforward to read and understand. ...read more.

Furthermore this is a type of stereotyping (e.g. working class men usually drink alcohol during a match) The Independent includes a sport which is not popular, such as cricket. For example, in The Independent there is an article suggesting that the England cricket team has lost by the unbeatable Pakistan team and this was a depressing and heart-breaking for England. One of these moments is when Geraint Jones, the England wicketkeeper, watched Pakistan's Shahid Afridi dispatch another boundary during his unbeaten 67 off 62 balls half way the match. The Independent chose Cricket as their chosen sport inside the games section because it's an upper class sport and the majority of the readers are Furthermore, the sport pages in The Sun and The Independent are different because The Sun uses many large coloured pictures few details about the sport whereas The Independent uses a medium sized black and white picture and huge quantities of information which sometimes end at the following page. Therefore, tabloids and broadsheets have different targets audiences and are different because of the way they written and the techniques they use; including the language used and issues written and how they are how they are presented. In conclusion, I have suggested what features a newspaper has to have to be recognised as either a tabloid or broadsheet. For that reason, I have analysed the generic codes and conventions of the two papers. ...read more.