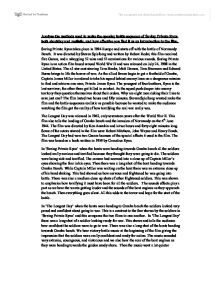 Analyse the methods used to make the opening battle sequence of Saving Private Ryan both shocking and realistic, and how effective you find it as an introduction to the film.

Analyse the methods used to make the opening battle sequence of Saving Private Ryan both shocking and realistic, and how effective you find it as an introduction to the film. Saving Private Ryan takes place in 1994 Europe and starts off with the battle of Normandy Beach. It was directed by Steven Spielberg and written by Robert Rodat, this film received five Oscars, and a whopping 52 wins and 53 nominations for various awards. Saving Private Ryan is an action film based around World War II and was released on July 24, 1998 in the United States. The all star cast starring Tom Hanks, Matt Damon, Tom Sizemore and Edward Burns brings to life the horror of war. As the allied forces begin to get a foothold of Omaha, Captain James Miller is ordered to take his squad behind enemy lines on a dangerous mission to find and retrieve one man, Private James Ryan. The youngest of four brothers, Ryan is the last survivor; the other three get killed in combat. As the squad push deeper into enemy territory they question themselves about their orders. Why are eight men risking their lives to save just one? The film lasted two hours and fifty minutes. Steven Spielberg wanted make the film and the battle sequences realistic as possible because he wanted to make the audience watching the film get the reality of how terrifying the real war really was. ...read more.

The effect on the audience is that the Germans looked very stressed and annoyed so this makes the audience think the Americans will win the war. The two films are very different in respect. In 'Saving Private Ryan', Captain Miller appears confused as he got out of the boat, he staggers and stumbles. We see his shock and confusion at everything around him. We can tell he looks very worried, he probably thinks he is going to die; he can't take in what's going on around him. We see a medium close up shot of Captain Miller's face as he got out of the sea. The audience was shown this because this tells them what Miller has to go through in the war. There was an over the shoulder shot of Captain Miller; this shows the audience Miller's perspective. The camera was all jumpy and shaky because it was a hand held camera. A hand held camera was used so we can follow the soldiers in action; the shot was also a point of view shot. There was also a medium close up shot of Miller putting his helmet onto his head, blood comes pouring out of it as he puts it on, and he had lifted it out of the sea. There was muted sound and slow motion throughout the scene but we could hear loud disturbing gunshots in the background. ...read more.

There was a long shot of the beach. This then allows the audience to see all the action there is really going on .The camera then zooms in on a backpack with the name Ryan on it. This links in to the rest of the film because the film is called 'Saving Private Ryan'. The two films were very different to each other because 'Saving Private Ryan' was very gory and bloody, we saw how many soldiers died. In 'The Longest Day' we didn't see any soldiers killed. In 'Saving Private Ryan' the soldiers were very frightened and were not feeling confident. In 'The Longest Day' the American soldiers were more confident and felt they would win. So even though the films are both to do with war, and they have got the same themes, they are still very different to each other. This gave a comparison to each other. Spielberg was successful in making the battle scene shocking and realistic because he has told exactly how the real battle was on Omaha Beach, he made the film look authentic. He wanted to shock the audience by putting realistic scenes in. From my point of view I found 'Saving Private Ryan' the most successful. I found it the most successful because I felt it was the most realistic. It was the most shocking and I felt like I was in the war with the American soldiers, although I disliked the gory bits in it. Overall both 'Saving Private Ryan' and 'The Longest Day' are successful in their own way. ...read more.