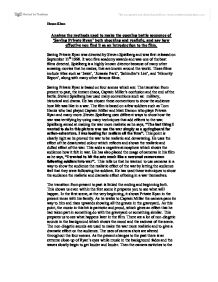 Analyse the methods used to make the opening battle sequence of 'Saving Private Ryan' both shocking and realistic, and say how effective you find it as an introduction to the film. Saving Private Ryan was directed by Steven Spielberg and was first released on September 11th 1998. It won five academy awards and was one of the best films directed. Spielberg is a highly known director because of many other amazing movies that he makes, that are known around the world. These films include titles such as 'Jaws', 'Jurassic Park', 'Schindler's List', and 'Minority Report', along with many other famous films. Saving Private Ryan is based on four scenes which are: The transition from present to past, the instant chaos, Captain Miller's confusion and the end of the battle. Steven Spielberg has used many conventions such as: military, historical and drama. He has chosen these conventions to show the audience how life was like in a war. The film is based on a few soldiers such as Tom Hanks who had played Captain Miller and Matt Damon who plays Private Ryan and many more. Steven Spielberg uses different ways to show how the war was terrifying by using many techniques that add effects to the war. Spielberg aimed at making the war more realistic as he says, "The last thing I wanted to do in this picture was use the war simply as a springboard for action-adventure. ...read more.

The sounds become diegetic as there are waves, but the soldiers are silent. This shows us the tension upon all the soldiers just about to fight. Then the boat engines along with vomiting and distant explosions can be heard. At this point there is so much tension upon the soldiers that the audience can feel what is going to happen. That's why the audience shows sympathy to them. As the second scene begins the boat doors open and the soldiers are shot by the Germans. Here mostly medium and close up shots are used to show the killings of the soldiers which shows the audience that the soldiers had no other options besides getting killed. This brings the audience to feel sympathetic for the soldiers. A long shot followed by a high angle shot are used to show that Germans were in power. The dominant position of the Germans is seen best with a high angle shot; it conveys a feeling of being surrounded by the enemy and also their superior power. The gun shots firing were very loud and overcame the sound of everything else. This applied to horror of the scene. As the Germans began firing at the Americans most of them started to flee underwater. As we can see the soldiers were absolutely terrified. This shows us that they desperately eager to escape. ...read more.

In the final scene, Captain Miller says, "That's quite a few". He was referring to all the dead soldiers on the beach and at that point melancholy music is played as the camera turns towards the whole picture of was left on the beach. Hundreds of bodies were placed on the battlefield dead. The audience at this point would feel terrible because of carnage shown. The final shot of the scene is the close up on Peter Ryan lying dead on the beach with a bloody tide rushing in. this links the scene at the start and the whole plot of the film. This is why the ending scene was the most effective scene of all because it immediately shows the reality and chaos, war brings to mankind. Finally the war ends. Overall I think Steven Spielberg has created an excellent film. The way the whole battle sequence followed and linked each other was remarkable. The graveyard, James Ryan crying and the music, really prepared me to expect the next scene to be a battle. Saving Private Ryan was so chaotic that it shocked and surprised me. Steven Spielberg succeeded in putting chaos on the screen because in nearly every scene there was something related to war. Saving Private Ryan was definitely a brilliant film because it really shocks you because it clearly displays how a war was like in World War Two. ?? ?? ?? ?? Hasan Khan ...read more.