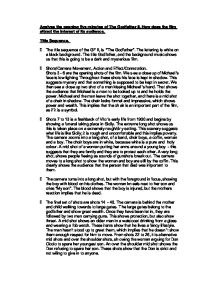 Analyse the opening five minutes of The Godfather II. How does the film attract the interest of its audience?

Analyse the opening five minutes of The Godfather II. How does the film attract the interest of its audience. Title Sequence. * The title sequence of the GF II, is "The Godfather". The lettering is white on a black background. The title Godfather, and the background music shows us that this is going to be a dark and mysterious film. * Shots/Camera Movement, Action and Effect/Connotation. Shots 3 - 6 are the opening shots of the film. We see a close up of Michael's face is low lighting Throughout these shots his face is kept in shadow. This suggests mystery and that something is supposed to be kept in secret. We then see a close up two shot of a man kissing Michael's hand. That shows the audience that Michael is a man to be looked up to and he holds the power. Michael and the man leave the shot together, and there is a mid shot of a chair in shadow. The chair looks formal and impressive, which shows power and wealth. ...read more.

* The camera turns into a long shot, but with the foreground in focus, showing the boy with blood on his clothes. The woman kneels next to her son and cries "My son". The blood shows that the boy is injured, but the mothers reaction implies that he is dead. * The final set of shots are shots 14 - 40. The camera is behind the mother and child walking towards to large gates. The large gates belong to the godfather and show great wealth. Once they have been let in, they are followed by two men carrying guns. This shows protection, but also show threat. A mid shot shows an older man in a waistcoat drinking from a glass and wearing a fob watch. These items show that he lives a fancy lifestyle. The man hasn't stood up to greet them, which implies that he doesn't show them enough respect for him to move. From shots 22 to 28, it is alternative mid shots and over the shoulder shots, showing the woman arguing for Don Ciccio to spare her youngest son. ...read more.

* Coppola uses diegetic sound, such as the gun shot in the first few scenes of the film. The gunshot lets the audience know the genre of the film. Guns are associated with violence, and violence happens in Action/Adventure films. This lets the audience knows what to expect in the film. Coppola uses non-diegetic sound, such as the music in the funeral scene. He uses it mostly to set the mood, and tell the audience how they should feel about what's going on. The music is somber and depressing, so the audience should feel saddened. Audience. Blumer and Katz uses and gratifications. * The target audience for the film is for adults, preferably between the ages of 18 to 35 and stereotypically aimed at males. Children and families are unlikely to see the film because of the age certificate (18). The film can be defined in the Gangster genre, and is great for entertainment and escapism. The film engages its desired audience as it has violence, crime and all based around dangerous people. This film was also greatly promoted and millions of people went to go and see it so this film is great for social interaction. ...read more.

This student demonstrates a clear understanding of film/media terminology and audience response. They have also started to look at some media theorists.
It would have been even better if they had explored some organisational issues in greater depth, eg. the studio, marketing etc.
****