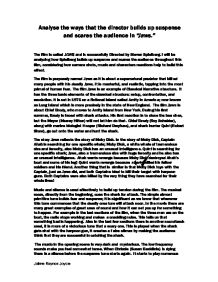 Analyse the ways that the director builds up suspense and scares the audience in Jaws.

Analyse the ways that the director builds up suspense and scares the audience in "Jaws." The film is called JAWS and is successfully Directed by Steven Spielberg. I will be analyzing how Spielberg builds up suspense and scares the audience throughout this film, considering how camera shots, music and characters reactions help to build this effect. The film is purposely named Jaws as it is about a supernatural predator that killed many people with his deadly Jaws. It is masterful, and realistic, tapping into the most primal of human fear. The film Jaws is an example of Classical Narrative structure. It has the three basic elements of the classical structure: setup, confrontation, and resolution. It is set in 1975 on a fictional island called Amity in America; now known as Long Island which is more precisely in the state of New England. The film Jaws is about Chief Brody, who moves to Amity Island from New York. During his first summer, Brody is faced with shark attacks. His first reaction is to close the beaches, but the Mayor (Murray Hilton) will not let him do that. Chief Brody (Roy Scheider), along with marine biologist Hooper (Richard Dreyfuss), and shark hunter Quint(Robert Shaw), go out onto the water and hunt the shark. The story Jaws reflects the story of Moby Dick. In the story of Moby Dick, Captain Ahab is searching for one specific whale; Moby Dick, a white whale of tremendous size and ferocity, also Moby Dick has an unusual intelligence. Quint is searching for one specific shark; Jaws, also a tremendous size with huge ferocity and he also has an unusual intelligence. Ahab wants revenge because Moby Dick destroyed Ahab's boat and some of his leg! Quint wants revenge because sharks killed his fellow soldiers and his friend. Another thing that is similar is that Moby Dick toys with the Captain, just as Jaws did, and both Captains tried to kill their target with harpoon guns. ...read more.

There is then a cut to a point of view shot acting as the shark attacking Alex. The music is still playing loud, (non-diegetic) the diegetic sounds are: the screaming people; the talking of people and the waves of the ocean. There is a quick cut to a level close up reaction shot of Chief Brody. The music is getting louder and faster as people run into the water. As the last few people run out of the water on the beach the music starts to soften and finally stops. This implies that the shark has left. The camera cuts to a level medium shot Alex's mother( Mrs Kintner, Lee Fierro) then a cut to a close up reaction shot of her distraught and confused face screaming out for her son. A cut is then used now showing the waves brush the yellow lilo covered in stains of red on the shore. (The lilo is intentionally yellow so the amount of blood and the damage done to it is emphasised.) All is silent apart from the diegetic sound of the waves. The second attack follows the first attack very closely but it is totally different! This time it is set in the middle of the day, therefore there are a lot of people about. Alex doesn't fight back whereas Chrissie did. Also in the second attack we see a lot of blood however in the first attack there is an absence of blood! The Director has built up the fear of the shark in many different ways. One way is music. Whenever we hear the suspense tune we always think of the shark and we always think he is about to attack! The music creates suspense, which automatically creates fear. Another thing that builds up the fear for the shark is showing the damage it can do. Physically and emotionally. An example of this is the morning the half-eaten hand is found. ...read more.

Quint slides towards Jaws, he is attacked, Jaws bites through Quint's spinal cord killing him! This is creating more tension because we think Hooper is dead and Quint is dead so Brody, the person with the least knowledge about sharks, is left on his own! Jaws is picking them off one by one! The boat is sinking fast! Jaws tries to attack Brody, this gives the audience a shock because there is no music or anything to suggest that Jaws is coming, this creates more tension. Brody throws an oxygen tank into Jaws' mouth. He then climbs onto the crow's nest to buy himself some more time. Brody doesn't know much about sharks but he knows a lot about weapons so he uses that knowledge to try and kill Jaws. Brody shoots at Jaws as he is swiftly swimming towards him and just at the right moment Brody shoots the oxygen tank, blowing it and Jaws up! Chief Brody is over the moon. It is calm again and we can hear the diegetic sound of birds and the water. Amazingly Hooper is not dead and appears, untouched! The two laugh together and swim away back to shore to the sound of victorious music. A happy ending! In my opinion the scariest part of the movie is the part when Jaws unexpectedly tries to attack Brody. I think the silence makes it scarier because the audience don't know that anything is coming. The camera quickly cuts to an extreme close up of Jaws as he attacks and I think it is quite a tense and scary moment in the film. My favourite part of the film is the scene Quint is attacked, I like the gore and I think that it is quite funny that even though Quint wanted revenge for the sharks killing his friends it was l was the shark getting revenge over Quint for him killing the sharks he has. Overall I think it is a good film and I think that tension and fear has been enforced throughout the film very well. ?? ?? ?? ?? Jaime Raynor-Joyce ...read more.