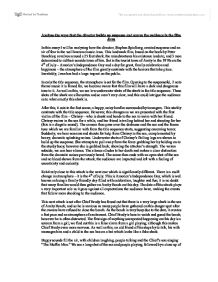 Analyse the ways that the director builds up suspense and scares the audience in the film Jaws In this essay I will be analysing how the director, Stephen Spielberg, created suspense and an air of fear in the well known classic Jaws. This landmark film, based on the book by Peter Benchley, revolves around a 25 foot shark, the misadventures his existence leads to, and 3 men determined to rid their seaside town of him. Set in the tourist town of Amity in the 1970s on the 4th of July - America's Independence Day and a day for great, family celebration and happiness - the atmosphere of the film greatly contrasts with the horrors that take place. Inevitably, Jaws has had a large impact on the public. In only the title sequence, the atmosphere is set for the film. Opening to the suspenseful, 2 note theme music it is famed for, we become aware that this film will have a dark and dangerous tone to it. As well as this, we see low underwater shots of the shark in the title sequence. These shots of the shark are silhouettes and so aren't very clear, and this could intrigue the audience as to what exactly this shark is. After this, it cuts to the first scene; a happy, noisy bonfire surrounded by teenagers. This starkly contrasts with the title sequence. However, this changes as we are presented with the first victim of the film - Chrissy - who is drunk and heads to the sea to swim with her friend. ...read more.

The camera does a close up on Chief Brody as he watches Alex getting attacked, highlighting hiss disbelief and guilt. We hear people on the beach shout and rush to the scene, devastated and struggling to get everyone out. Alex's mother approaches the scene and is in disbelief, thinking her son is instead getting out of the sea rather than the one killed by the shark. All that is left of Alex is the deflated, destroyed lilo floating back to the shore, giving a sense of how dangerous this animal is. The danger of this shark is prominent from very near to the beginning of the film. As the film first begins we are unaware of what this perilous force is because we are only shown unclear silhouettes. With the parallel sound of the theme tune played each time this silhouette is shown, the suspense is built up for this unseen terror. Whilst Brody reads a book on sharks, we are shown images of death, sharp teeth, blood and sharks - each one of these have connotations of dreadfulness and disgust, and this would build up the feeling of terror the audience already have. After research and help from Hooper, this shark is believed to be larger than the average shark and so thought to be much more dangerous. However, the predictions of the shark's immense size are nothing compared to the reality when he is finally clearly seen. ...read more.

The audience will already be filled with anticipation and interest from the vague, brief but shocking first attack, only to again be astonished by another attack less than 20 minutes later. Before each attack, we are also shown each victim. When the victims are shown pre-attack, they are shown to be happy or carefree (e.g.: Chrissy is drunk and relaxed, Alex is celebrating and playing) and are then suddenly shown to be screaming, terrified and violently dying. Another use of the changing of our angle of perception is in the last scene when the men are in the jetty. The jetty is shown to be small, wooden and weak. Already, we are assuming that this jetty will put up no fight against any attacks. When the shark, which is easily double the size of the jetty, is shown are assumptions are correct and only made clearer. Overall, I think that Stephen Spielberg was very successful at creating growing tension in Jaws. A scene that particularly stood out for me was the first attack. The way that the scene entirely changed atmosphere - from a typical teenage setting of a fun night with friends to a tragedy like Chrissy's - really impacted me. The way that the two parts of the scene so harshly contrasted made it more suspenseful, and the fact that her friend walked right into the scene and saw it makes the scene connect more with the audience. Although this was my favourite part in regards to tension, each of the scenes were very well made, and each made use of great techniques, ranging from camera angles, music, false alarms and contrast. ...read more.