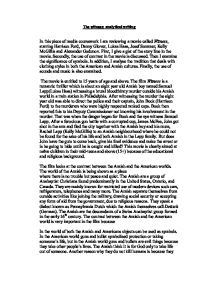 In this piece of media coursework I am reviewing a movie called Witness, starring Harrison Ford, Danny Glover, Lukas Haas, Josef Sommer, Kelly McGillis and Alexander Godunov. First, I give a gist of the story line in the movie. Secondly, the use of contrast in the movie is discussed. Then I examine the significance of symbols. In addition, I analyse the tradition that deals with clothing styles in both the American and Amish cultures. Finally, the use of sounds and music is also examined.

The movie is entitled to 15 years of age and above. The film Witness is a romantic thriller which is about an eight year old Amish boy named Samuel Lapp(Lukas Haas) witnessing a brutal bloodthirsty murder outside his Amish world in a train station in Philadelphia. After witnessing the murder the eight year old was able to direct the police and their captain, John Book (Harrison Ford) to the murderers who were highly respected ranked cops. Book then reported this to his Deputy Commissioner not knowing his involvement in the murder. That was when the danger began for Book and the eye witness Samuel Lapp. After a ferocious gun battle with a corrupted cop, James McFee, John got shot in the arm and fled the city together with the Amish boy and his mum, Rachel Lapp (Kelly McGillis) to an Amish neighbourhood where he could not be found for the sake of his life and both Amish in the Lapp family. But does John have the guts to come back, give his final evidence and make the arrest or is he going to hide until he is caught and killed? This movie is clearly aimed at naïve children in their mid-teens and above (15+) because of the educational and religious background.

In the world of both the Amish and Americans objects can be used as symbols. In the American world guns and bullet symbolised protection or taking someone’s life, but in the Amish world guns and bullets are evil things because they take other people’s lives. The Amish think it is for God only to take life out of someone. Another reason why they do not kill humans is because they can not judge others whether they are good or evil and only God can. That is why it is in God’s place to judge and end the life of a person. Also the Amish do not use buttons but hooks and eyes because according to them buttons are proud and not plain whiles hooks and eyes are vice-versa. Back in America buttons do not signify anything. The wooden birdhouse in the Amish world signifies peace because in the Bible, birds such as doves are holy and peaceful signs. As a result, the Amish build a birdhouse in order to gain peace in their household.

In the movie the Amish style of clothing differ from the American style. The things that draw a distinction between the two cultures are as follows: In America the males have the decision to wear any type of clothes they want (depending on where they are going), but in the Amish world the males are expected to wear dark-coloured suits, straight- cut coats without lapels, broad fall trousers, suspenders, solid-coloured shirts, black socks and shoes, and black or straw broad-brimmed hats. They also fasten their shirts with conventional buttons, but their suit coats and vests are fastened with hooks and eyes.

In America the females wear practically anything they want according to the places they go to. However in the Amish society the females tend to wear modest dresses made from solid-coloured fabric with long sleeves and a full skirt (not shorter than half-way between their knees and the floor). The dresses are covered with capes and aprons, fastened with straight pins or snaps. Also they are known for not cutting their hair but they wear their hair in a bun on the back of their hair to make it tidy. In addition, they wear a white prayer on their head to signify that they are married and a black one for vice-versa. In the scene where Rachel the widow offers John her dead husband clothes because John’s clothes were stained with blood and for the fact that  he would stand out as a stranger if he continued to wear his clothes signifies that the Amish try to make use of everything around them. Also when Rachael took off her cap before going to John at the end of the movie it signifies that she is not married therefore John can kiss her since they are madly in love.

Music in both worlds is conveyed in different ways. It is also used to create an atmosphere of suspense. For instance, in the murder scene in the film, the music is played in a fast tempo with repeated scenes.

Overall, the above review attempts to critically analyse the movie Witness by examining the use of contrast, symbols, cultural values, sound and music and their significance.