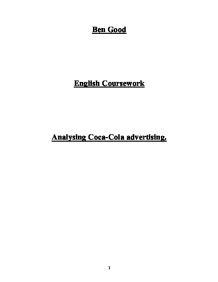 Ben Good English Coursework Analysing Coca-Cola advertising. "Coca-Cola" advertisements History of "Coca-Cola" The drink was created in 1886 by Doctor John Pemberton a pharmacist from Atlanta, Georgia. John Pemberton concocted the "Coca-Cola" formula in a three legged brass kettle in his backyard. The name was a suggestion given by John Pemberton's bookkeeper Frank Robinson. Being a bookkeeper, Frank Robinson also had excellent penmanship. It was he who first scripted "Coca-Cola" into the flowing letters which has become the famous logo of today. Advertising has been a major contributing factor in Coke's modern day popularity. It's first ever slogan was simply "Drink "Coca-Cola". It is the world's most popular soft drink but in recent years it has been getting some stiff competition from Pepsi. This sparked a new wave of advertising to overcome its opposition. The most famous and successful "Coca-Cola" advert is the 1971 'I'd like to teach the world to sing advert'. In the mid nineteen eighties to help in the war between Coke and Pepsi which at that time Coke was losing, they changed the formula. However this was met with strong opposition by the consumer who disliked the 'New Coke' and the company was forced to reproduce the original Coke formula under the name of classic Coke, gradually 'New Coke' was taken off the shelves and 'Classic Coke' became the worlds most popular soft drink again. The Posters In class we saw many "Coca-Cola" still poster advertisements and I have chosen three of them to analyse. The first poster that I am going study was launched in 1982 in a series of advertisements all with the slogan "Coke Is It!" This campaign had an emphasis on the product's qualities of taste and refreshment. The direct, positive statement "Coke Is It!" was meant to appeal to the forthright mood of Americans in the 1980s. "Coke Is It!" played on themes of previous ad campaigns, stressing the quality, the enjoyment and especially the anticipation of drinking a "Coca-Cola". ...read more.

"I'd like to teach the world to sing" (1971) Originally "I'd like to teach the world to sing" was not a success when it was first released on the radio as a jingle, so much so it even got hate mail. However after the disappointment of the radio advert the producer tried to persuade the "Coca-Cola" executives to let him create a television commercial which included the song. The "Coca-Cola" executives said "Yes" and they gave him $500,000 which made it the most expensive advert ever made at the time. Originally it was set to be filmed in Britain with a thousand children on a hillside in Cornwall. However they were forced to film it in Italy instead because of the weather. Also the amount of children had to be cut down. When the advert was finally put on television it became the first ever advert to receive over 100,000 letters of fan mail all saying the same thing, they wanted a single. "Coca-Cola" agreed to this and "I'd like to teach the world to sing" became the Christmas number one. The 'Hilltop' advert is set in southern Italy on a hill. There are about four hundred people standing singing a song these are the lyrics: I'd like to buy the world a home And furnish it with love Grow apple trees and honey bees And snow white turtle doves. Chorus: I'd like to teach the world to sing In perfect harmony I'd like to buy the world a Coke And keep it company It's the real thing. Chorus 2: What the world wants today "Coca-Cola" Is the real thing When listening to the advert the lyrics start to overlap in the second chorus with the first verse. However you can hear the words "Coca-Cola" and Coke clearly and frequently. It even manages to blend the first line and the penultimate line to create "I'd like to buy Coca-Cola" This advert is clever because it hooks the audience in by not mentioning the product until 25 seconds into it so the audience is left guessing what it could be advert for. ...read more.

Then it cuts to a blond haired woman holding up a bottle of Coke near her head and the slogan appears saying "You Can't Beat the Feeling" and the "Coca-Cola" logo appears. This was a very popular advert when it was released in 1988 but now it seem quite out of date and its means of persuading the people to buy the product with that type of music doesn't work that well anymore. "Coca-Cola" features a lot in this advert for example: Coca Cola is said after only five seconds and is said at least once every five seconds for the rest of the commercial. This is to make sure that the product is remembered by the viewer. Surveys have revealed that the majority of people remember adverts but forget the name of the product. A startling discovery was that a large number of people even associate the rival product with the commercial, so the name has to be remembered. But this does tend to be the case in a lot of American adverts they are more direct and more competitive than British commercials Overall out of the two I much prefer the "I'd like to teach the world to sing" advert the main reason for me thinking so is it's simply more entertaining than the slightly annoying "Can't beat the feeling!" advert. The intentions of the two adverts were the same, to sell Coke, but they both went about them in different ways. "Can't beat the feeling's" approach was musical vignettes, with a parade of fleeting impressions; they were once fashionable but are now not. Entertaining perhaps, but now impotent at selling products. Whereas "I'd like to teach the world to sing's" approach was more subtle. It seemed to be more like a British commercial than an American one because you don't get the feeling the product is being "shoved down your throat". "I'd like to teach the world to sing" is better than "Can't beat the feeling!" in almost every area, but what it really comes down to is which one would make you buy Coke the most? 1 ...read more.