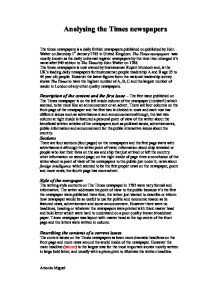 Analysing the Times newspapers The times newspapers is a daily British newspapers published on published by John Walter on Saturday 1st January 1785 in United Kingdom. The Times newspapers was mostly known as the daily universal register newspapers by the time then changed it's name after 940 edition to The Times by John Walter on 1788. The times newspapers is now owned by businessman Rupert Murdoch and, is the UK's leading daily newspapers for businessman people readership A and B age 25 to 44 year old people. However the latest figures form the national readership survey shows The Times to have the highest number of A, B, C and the largest number of reader in London of any other quality newspapers. Description of the content and the first issue - The first issue published on The Times newspaper is on the left inside column of the newspaper (number1) which seemed, to be more like an announcement or an advert. There are four columns on the front page of the newspaper and the first two is divided in rows and each row has different issues such as advertisement and announcements although, the last two column at right inside is featured a personal point of view of the writer about the beneficial written articles of the newspapers such as political issues, advertisements, public information and announcement for the public interactive issues about the country. Sections There are four sections (four pages) ...read more.

- Business pages begin on the centre of the newspaper followed by the register. containing obituaries, court and social issues. - Sport section at the end of the main paper with crossword puzzle on the back cover. Analysing the sun newspaper The Sun newspaper cover is very simple, natural, and sensational. However the masthead is printed in red and white also the headline "GOTCHA" was published in 1982 and connotes war in the context, in relation to the sinking of the Argentinean battle cruiser during the Falklands war. The word GOTCHA is a slang word which simply means I have got you and The Sun usually use slang words such lads, posh (personal issues) because of its target audience which is C, D and E. There are main headline, leading story, second leading story, by-line sub-head and gutters on The Sun newspaper cover. The main headline is bigger than the leading story printed in bold although there some sub-head. Layout The page is laid out with featured stories, main headline above the masthead, and black and white photo print at left inside the middle page the cont text below. Representation of the sun newspaper cover The representation of the headline published on the Sun newspaper cover on May 4th 19812 during the Falkland war between United Kingdom and Argentina, represented to Argentina sunk boat destroyed by British army killing several people over disputed Falkland Island, south Georgia and south Sandwich Island which consisted tow large and, many small Islands in the south Atlantic Ocean. ...read more.

Mr Gorman also complained that Sunday Times journalists had "stalked him" at his flat and chased him for comments even after he had told a journalist that his lawyers had advised him not to speak to reporters and that all enquiries should be referred to them. His solicitors described a number of incidents which they claimed amounted to harassment under the Code of Practice. The newspaper told the Commission it was their established practice to go wherever possible to primary sources rather than legal representatives. When Mr Gorman declined to comment on the telephone, a reporter had visited his home and behaved in a polite and civil way which could not be described as stalking. It was rather in a well-established tradition of door-stepping. They disputed the facts of the instances described by Mr Gorman's solicitors. Describe the work of William Howard Russell. Explain how he influenced war correspondence. William Howard Russell was one of the first modern war correspondent in 11th February 1907 spending tow years covering the Crimean war including the charge on the light bridge war on times newspaper. . Compare the work of William Howard Russell to a modern war correspondent of you choice. Explain how war correspondence has developed and changed over the time. Types of Newspapers Title of newspaper Price of newspaper Average number of newspaper sold per day What Percentage of adults in group A, B and C1? Highest percentage age group Who publish the newspaper? The Sun Monday- Friday 35p Saturday 55p ?? ?? ?? ?? Antonio Miguel ...read more.