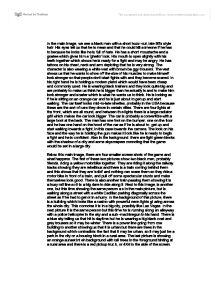 In the main image, we see a black man with a short buzz-cut, late 90's style hair. His eyes tell us that he is mean and that he could kill someone if he has to because he looks like he is full of hate. He has a short moustache and a goatee which gives him a 'ghetto' look. His mouth is open slightly with his teeth together which shows he is ready for a fight and may be angry. He has tattoos on his chest, neck and arm depicting that he is very strong. The character is also wearing a white vest with brown baggy trousers. The vest shows us that he wants to show off the size of his muscles to make himself look stronger so that people don't start fights with and they become scared. In his right hand he is holding a modern pistol which would have been cheap and commonly used. He is wearing black trainers and they look quite big and are probably to make us think he is bigger than he actually is and to make him look stronger and scarier which is what he wants us to think. He is looking as if he is sitting on an orange car and he is just about to get up and start walking. ...read more.

In the background of this picture, there is a building which looks like a casino with powerful neon lights glaring across the whole city. This connotes it is in a big city, possibly like Las Vegas. In the next picture it is the same person but this time he is running along an alleyway with a police helicopter in the sky and a sub-machinegun in his hand. There is a blue sky telling us that hit is daytime but he is wearing a big black coat and grey trousers so it may be winter. There is a power line going from one building to another showing us that it is urban but there are trees in the background which contradicts the fact that it may be urban, so it may just be a park in the city or a housing block in a rural area. The last picture is showing an orange sunset int eh background with tall trees in the foreground hinting at a rural area and there is a red pickup truck, or 4X4 to the side of the screen. This tells us that in the game the day changes to night and there are several stages between. ...read more.

"San Andreas" is written in a different font in the style of how gangsters had words tattooed on their bodies at that time. Further down the page we have written in a smaller font "A Rockstar North Production". This again tells us about Rockstar that they want us to know that they have made it. Then it says in a much bigger font "Out Now" which makes us really notice it because it is written in white on a black background and it is really big. When we see this it makes us think that we can go to the shop and buy it therefore giving the company more money. Then below the four screen shots it has a web site: www.rockstargames.com/sanandreas. This tells u that we can go to this website to find out more information about this game if we really want to. Below this is some text saying that there is a soundtrack available on Interscope records. This is telling us that if we bought the game and we like the music we could go to a music shop or the Interscope Records website and buy it there. Rights at the bottom of the page there is the legal statement with the copyright statement to the logos and names of the companies involved. This must be shown otherwise people can get away with using their logos. ...read more.