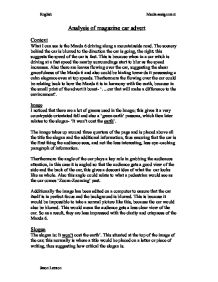 Analysis of magazine car advert Context What I can see is the Mazda 6 driving along a mountainside road. The scenery behind the car is blurred to the direction the car is going, the right: this suggests the speed of the car is fast. This is because when in a car witch is driving at a fast speed the nearby surroundings start to blur as the speed increases. Also there are leaves flowing over the car, suggesting the shear gracefulness of the Mazda 6 and also could be hinting towards it possessing a calm elegance even at top speeds. Therhermore the flowing over the car could be relating back to how the Mazda 6 is in harmony with the earth, because in the small print of the advert it boast- '....car that will make a difference to the environment'. Image I noticed that there are a lot of greens used in the Image; this gives it a very countryside orientated fell and also a 'green earth' passona, which then later relates to the slogan- 'It won't cost the earth'. ...read more.

Slogan The slogan is: It won't cost the earth'. This situated at the top of the image of the car; this normally is where a title would be placed on a letter or piece of writing, thus suggesting how critical the slogan is. The slogan has a double meaning, the first one is Mazda 6 is not going to cost a large amount of money, because that is probably thinking, due to its sporty look. The second meaning is the Mazda 6, with its 'lower fuel emissions' is that it will be less damaging to the environment, as some sports cars are seen as doing. This double meaning is a very effective way of advertising; this is because it gives the audience two pieces of information at the same time. This not only gets across two pieces information quickly, it also intrigues the audiences with its double meaning. Copy The additional text that is featured in the advert is in the following order down the page: 1. ...read more.

Additionally this font sets up the audience mentally to take onboard this straightforward message. Target audience The target audience in this advert is a male/female who is looking for a slightly sportier concept car, but who at the same time is concerned about the environment. The target age would be 21-65, the lower part of this would is likely to be engrossed to the sporty side of the car whereas that latter half is most likely to be concerned to the claim that the car is a good thing for the environment. Caption The caption is placed directly under the image of the Mazda 6, it says-'The new Mazda 6 Diesel, Soul of a sports car from � 14,600' .The word soul is used to relate to a human soul, because people usally refure to there soul being inse there body, as with the Mazda 6 the message is being conveyed that aloth it may not have a fully sporty exteror, within it has the insides of a sports car. English Media assignment Jason Leeson ...read more.