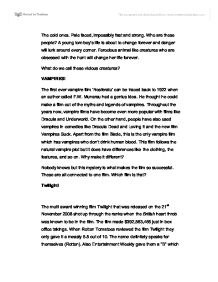 Analysis of the trailer for &quot;Twilight&quot;.

The cold ones. Pale faced, impossibly fast and strong. Who are these people? A young tom boy's life is about to change forever and danger will lurk around every corner. Ferocious animal like creatures who are obsessed with the hunt will change her life forever. What do we call these vicious creatures? VAMPIRES! The first ever vampire film 'Nosferatu' can be traced back to 1922 when an author called F.W. Munarau had a genius idea. He thought he could make a film out of the myths and legends of vampires. Throughout the years now, vampire films have become even more popular with films like Dracula and Underworld. On the other hand, people have also used vampires in comedies like Dracula Dead and Loving It and the new film Vampires Suck. Apart from the film Blade, this is the only vampire film which has vampires who don't drink human blood. This film follows the natural vampire plot but it does have differences like the clothing, the features, and so on. Why make it different? ...read more.

This makes him a cool and aloof person. However, Bella dresses quite plain which makes her different to the other girls and this also indicates that there is something strange about her. She comes across mostly as a geeky tom boy. As most vampires portrayed in films, Edward is very pale which could indicate illness, coldness or even death. His eyes are also another big giveaway to show he is different because when he is hungry they turn black but when he drinks blood they turn either gold or red depending on whether they are on animal or human blood. Edward throughout the trailer is always positioned higher than Bella. This shows he has got more power and authority. The power also indicates he is stronger, older, and smarter and is more established. In the trailer there is a variety of different camera angles to make the film look outstanding and less boring. These camera shot are ones like big close up, close up, high angle shot and so on. The camera angle 'big close up' really shows the importance of a certain part of the film. ...read more.

This may make the audience get more into her to see how she is going to fit in to the new environment and how she is going to try to fit in with the rest of the students. On the other hand Edward is a very confident, old fashioned, romantic good guy. He tries his hardest to keep away from Bella because of love not hate. He actually tries to scare her off when she discovers he is a vampire even though he knows she is his true love. The story is two natural enemies (good and bad) joining together against all odds and hoping for the best. It is a forbidden love story between a lion and a lamb. We learn that Bella is always in danger and the audience will expect lots of action and romance from the film. I think that the trailer is a really effective way to get people to watch the film. The trailer shows all the best bits in the film like when Bella nearly gets crushed by the car and when Edward pulls the tree out the ground and throws it. The music is also good because it creates tension. ...read more.