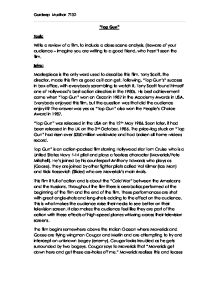 "Top Gun" Task: Write a review of a film, to include a close scene analysis. (Beware of your audience - imagine you are writing to a good friend, who hasn't seen the film. Intro: Masterpiece is the only word used to describe this film. Tony Scott, the director, made this film as good as it can get. Following, "Top Gun's" success in box office, with everybody scrambling to watch it, Tony Scott found himself one of Hollywood's best action directors in the 1980s. His best achievement came when "Top Gun" won an Oscar in 1987 in the Academy Awards in USA. Everybody enjoyed this film, but the question was that did the audience enjoy it? The answer was yes as "Top Gun" also won the People's Choice Award in 1987. "Top Gun" was released in the USA on the 12th May 1986. Soon later, it had been released in the UK on the 3rd October, 1986. The price-tag stuck on "Top Gun" had risen over $350 million worldwide and had broken all home-videos record. Top Gun" is an action-packed film starring Hollywood star Tom Cruise who is a United States Navy F-14 pilot and plays a fearless character (Maverick/Pete Mitchell). He's joined by his counterpart Anthony Edwards who plays as (Goose). They are joined by other fighter pilots called Val Kilmer (Ice Man) and Rick Rossovich (Slider) who are Maverick's main rivals. This film it full of action and is about the "Cold War" between the Americans and the Russians. Throughout the film there is aerobatics performed at the beginning of the film and the end of the film. These performances are shot with great angle-shots and long-shots adding to the effect on the audience. This is what makes the audience raise their necks to see better on their television screen. It also makes the audience feel like they are part of the action with these effects of high-speed planes whizzing across their television screens. ...read more.

"Lieutenant Mitchell, Top Gun rules of engagement exist for your safety and that of your team. They are not flexible, nor am I. Either obey them or you're history." Viper's status at "Top Gun" is much larger than Mavericks and Viper shows this by looking outside the window. This suggests that he's not even willing to give eye-contact to his pilots. After Maverick and Goose are dismissed from Viper's office, Viper asks his colleague that "if you had to go into a battle, would you want him with you?" His colleague responds "I don't know, I just don't know." This implies that he knows Maverick has the ability to win but on the other hand, Maverick is risky and put his and other's lives at risk. However, if you don't know the answer to a question, you say "I don't know" once. But he says it twice showing that he really is unsure about the question Viper has given him. In the middle of the night, Goose enters Maverick's room claiming that he can't get to bed. When somebody can't get to sleep, the obvious reason is that they must be in deep thought about something. In Goose's case, it is that he wants to graduate not just blow his career. Goose says "When I realised we were off to "Top Gun," all I could think of what that trophy. I've got to be straight with you, Mav. Right now I just hope to graduate." This shows that Goose is not here to mess about and ruin his career; he has a family to think about now. He can't let Maverick do circus stunt fly-bys and breaking rules consistently and get into more deep trouble with Viper. He expresses his feeling to Maverick without hesitation. He says to Maverick that "I can't blow this." Maverick has no other family, as with his father is classified as "dead", the only person he has close to him is Goose. ...read more.

This mystery has been haunting Maverick and he asks Viper, "So he did do it right." And Viper says "Yeah he did it right." With Viper telling Maverick this fact, it has lifted the burden and the weight of Maverick's shoulders. With Charlie, Carole and Viper trying to convince Maverick to graduate, it has worked. The burden has been lifted off Maverick's shoulders and this motivates him and he also want to prove him to others. Maverick decides to return to "Top Gun" and has a mission to face. He must provide air-support to a SS Layton ship which has disabled into foreign territory. Stinger says to all the pilots "This is what you've been trained for." When Maverick is held to take off, Iceman seems to be in trouble with 5 bogeys (MIGs) on his back. Without further delay, Maverick is forced to help Iceman and does so after firing lock on all bogeys, one by one. When Iceman has been rescued, Maverick and the other pilots have made their country proud. Maverick become a hero and afterwards, he sits in the bar on his own. All of a sudden, the song "You've lost that loving feeling" is heard. When Maverick looks around the bar, he sees Charlie who left the Washington job for Maverick. Conclusion: This film is up there with the best of the best. A feature of this film makes this film a success. The feature is "Camera Shots." The camera shots appear from a range of angles. But the quick capturing of the faces to the aircraft adds to the film's adrenaline. I enjoyed this film as I enjoyed the action part of the movie. It wasn't just the action part, it was also the romance, comedy and rivalry between particular pilots. The best scene I enjoyed was the scene where Goose died because it shows that when things can go wrong, it does go wrong. That was the case in this film. ?? ?? ?? ?? Gurdeep Mudhar 7132 ...read more.