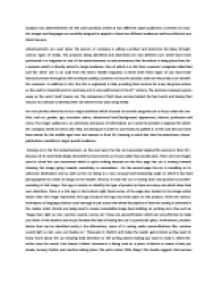 ﻿Analysis two advertisements for the same products aimed at two different target audiences. Comment on how the images and languages are carefully designed to appeal to these two different audiences and how effective you think they are. Advertisements are used when the person or company is selling a product and promotes the ideas through various types of media. The products being identified and advertised are two different cars which have been positioned in a magazine as one of the advertisements to raise awareness that the advert is being place there for a purpose which is directly aimed to target audience. One of which is a Fiat from a women?s magazine called Red and the other one is an Audi from the Men?s Health magazine. In brief, both these types of cars have been famously known throughout the world persuading customers to buy the product and how the product can benefit the customer. In addition to this, the Fiat is originated in Italy providing their services for a very long time where as the Audi is manufactured in Germany and is very well known in the 21st century. The German company is given away as the word ?Audi? means car. The companies of both have success behind the hard work and having their reasons to continue to develop their cars better every year using media For ever product there has to be a target audience which is based on several categories set to focus under the one title, such as: gender, age, economic status, educational level/background, appearance, interest, profession and more. ...read more.

These give it rhythm and make the reader gain interest as they want to know more about the car drawing bold attention to the writing above making you want to read it. When the writer uses the words ?cool breeze Frisbee? Assonance is being used as a piece of device to create a lively yet slowly moving rhythm and reaction taking place. The write states ?little things? this clearly suggests that women want little thing in life that make them happy and be part of. When ?little things? come to mind the reader think about words associating with it and also explains the car being part of your life which makes the reader feel as if the car is one of the many little things that make you happy .This car is ideal for a women because the image is rather feminine and it?s a car which could take you anywhere depending on mood. Although this is advertised for women it also seems like a family car for the future or a spare car which is not in use. Women in their 20?s would often go out in the afternoon or a trip down the road which is why the writer has chose this car for the women. However on the other hand the Audi car is aimed at men in their 20?s as it?s in the men?s health magazine. ...read more.

When the write uses word like ?its looks, speaks for themselves? this suggests that the car does all the talking and make the reader want to buy it. By using personification it makes the reader gain interest of the way the writer describes it in very time consuming and slow way. The writer wants the reader to recall on what it means by ?looks and speaks for themselves. When the writer uses the word ?fighting torque? this explains that there is a double meaning known as the pun twisting the words to make the reader confused in what he is putting across. (fighting talk) the writer uses humour from lines 0-6 ?the same time it took you to read this sentence there is 5% chance of keeping you licence? which suggests that the car is at an even faster speed than before. Finally the whole advertisement is a reference to a boxing movie?rocky?a winner. Scientific language is used as if hard work and research has been backed into this to make it professional. In my opinions I personally believe that I would go for the Fiat simply because it would be very useful on a day out and up until that certain mature age as they get older women often choose what they want in life and most of all what better to make them happy than a carand I would be happy to drive it anywhere for the reason being that its small and simple nothing too hardworking and future planning would also come to mind. ...read more.