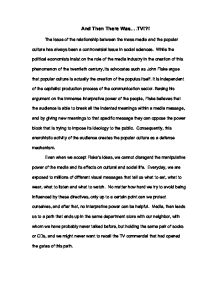 And Then There Was....TV!?! The issue of the relationship between the mass media and the popular culture has always been a controversial issue in social sciences. While the political economists insist on the role of the media industry in the creation of this phenomenon of the twentieth century, its advocates such as John Fiske argue that popular culture is actually the creation of the populus itself. It is independent of the capitalist production process of the communication sector. Basing his argument on the immense interpretive power of the people, Fiske believes that the audience is able to break all the indented meanings within a media message, and by giving new meanings to that specific message they can oppose the power block that is trying to impose its ideology to the public. Consequently, this anarchistic activity of the audience creates the popular culture as a defense mechanism. Even when we accept Fiske's ideas, we cannot disregard the manipulative power of the media and its effects on cultural and social life. Everyday, we are exposed to millions of different visual messages that tell us what to eat, what to wear, what to listen and what to watch. No matter how hard we try to avoid being influenced by these directives, only up to a certain point can we protect ourselves, and after that, no interpretive power can be helpful. Media, then leads us to a path that ends up in the same department store with our neighbor, with whom we have probably never talked before, but holding the same pair of socks or CDs, and we might never want to recall the TV commercial that had opened the gates of this path. ...read more.

It is obvious that when we take two newspapers, say The Gazette and The National Enquirer, we are more intended to believe the news covered in The Gazette. However, as Giddens puts it, according to research, if a news report on television differs from a newspaper account, more than twice as many people will believe the televised version as the newspaper one (Giddens, 79). The listeners of the Nixon- Kennedy debate on the radio saw Nixon as the obvious winner. However, the ones who watched the debate on TV were sure that Kennedy would become the new president of the United States (Hughes, 4). The TV viewers were right, but what made them think that way if it was the ideas that mattered? According to Giddens, if the current trends in television watching continue, by the age of 18 the average child born today will have spent more time watching TV than in any other activity except sleep (Giddens, 449). In 1947, there were 170,000 television sets in US homes, by the year 1991 the number reached to 750 million, and considering the fact that an average 18 year old American is exposed to approximately 350,000 television commercials, the picture becomes more dramatic (Coupland, 182). The persuasive affect of the television therefore follows two steps. First it is the synthesis of video and audio, which means that it involves action and sound as the most realistic forms of communication making it the most popular electronic device ever produced. We are more likely to accept what it tells us as the truth than any other medium. ...read more.

cannot stand, namely, that in one case we see the actual horror of a bomb dropped by Americans and that, in the other case, we see the fictional horror of a bomb imagined by Americans to have been dropped upon Americans by someone else. Thus television is engaged in a retrospective political history on the nuclear front, which parallels the current remaking of the Vietnam War and America's re-humanization of military adventure (O'Neill, 190-91). In both cases, we see the stabilizing function of the television. Through an auto-control mechanism, as well as the promotion of what the authorities define as suitable, it manipulates reality into a socially comfortable and acceptable rhetoric. As the audience, we consider the tales of the television to be the most reliable ones, for now it is our new grandfather. Therefore, the control of the society through television, by those who control it, and directing the society towards a certain destination, which is found to be the "way forward for humanity", and keeping the system together by creating a popular culture based on consumerism; turns out to be a post-modern way of practicing authority in our post-modern lives. After all, we breathe visually; we live with images, both of ourselves and of other people; we talk with the symbols of a mechanized life, and tell ourselves "everything is under control"; we pet the remote-control, not our little puppies; and we thankfully worship our TV set, for He has enabled us to be what we are today. We are the children of a new clan, and television is the Good Shepherd of the post-modern times, preaching the virtuous American way of life, and He has long established "His Kingdom on Earth". ...read more.