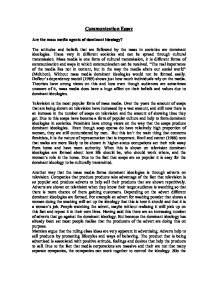 Communication Essay Are the mass media agents of dominant ideology? The attitudes and beliefs that are followed by the mass in societies are dominant ideologies. These vary in different societies and can be spread through cultural transmission. Mass media is one form of cultural transmission, it is different forms of communication and ways in which communication can be received. "The real importance of the media lies not in content, but in the way the media alters our social world" (Mcluhon). Without mass media dominant ideologies would not be formed easily. Defleur's dependency model (1989) shows just how much individuals rely on the media. Theorists have strong views on this and how even though audiences are sometimes unaware of it, mass media does have a huge affect on their beliefs and values due to dominant ideologies. Television is the most popular form of mass media. ...read more.

Another way that the mass media forms dominant ideologies is through adverts on television. Companies that produce products take advantage of the fact that television is so popular and produce adverts to help sell their products that are shown repetitively. Adverts are shown on television when they know their target audience is watching so that there is more chance of them gaining customers. Depending on the advert different dominant ideologies are formed. For example an advert for washing powder that shows a women doing the washing will set up the ideology that this is how it should and that it is a women's job. People watching the advert, maybe without realising it will pick up on this fact and repeat it in their own lives. Having said this there are an increasing number of adverts that go against the dominant ideology. But because the dominant ideology has already been set most people realise that the producers of the advert are doing this on purpose. ...read more.

Radical feminists argue that it is male domination that causes the media to portray dominant ideologies such as these. The media content reflects the nature of a male dominated society in general. In conclusion it is clear that the mass media is one of the main ways that dominant ideologies are created. As certain forms of the media become increasing popular then the images that are shown in the media are more important because they make a difference to peoples lives. Frueh and Mcghee interviewed American kindergarden children about the amount of time they spend watching television to see if it has any connection with their views on sex roles. They found the girl's that watch a lot of television want to imitate the roles of women that they see on television. Because women roles on TV are usually lower than men they found that most girls between 3 and 6 had abandoned ambitions by this early age. This shows how important mass media is when it comes to forming dominant ideologies. ...read more.