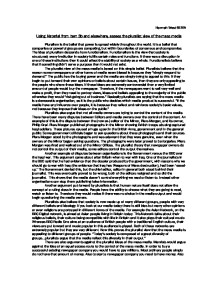 Hannah West 6ERW Using Material from Item 3b and elsewhere, assess the pluralist view of the mass media Pluralism is the belief that power is spread widely throughout the world. It is a belief that companies or powerful groups are competing, but within boundaries of consensus and compromise. The idea of pluralism descends from functionalism. Functionalism is the view that society is structured; every institution in society fulfils certain roles and functions. If there was a disruption in one of these institutions then it could affect the stability of society as a whole. Functionalists believe that if something didn't serve a purpose then it would not exist. The pluralist view of the mass media is based on this simple belief. Pluralists believe that the reason some newspapers or other forms of media seem biased is because they "simply respond to demand." The public has the buying power and the media are simply trying to appeal to this. If they begin to put forward their own opinions or beliefs about certain issues, then they are only appealing to the people who share these ideas. If these ideas are extremely controversial then a very limited amount of people would buy the newspaper. Therefore, if the newspapers want to sell very well and make a profit, then they need to portray views, ideas and beliefs appealing to the majority of the public otherwise they would "risk going out of business." ...read more.

Whereas BBC Radio One aims at an audience of British people with a traditional English culture, their views are put forward and music popular in this audience is played. Both of these networks are extremely popular but they are very different. Now this proves the pluralist view that the mass media is appealing to different groups of people. "Today's society is composed of a great diversity of groups...pluralists argue that the media reflect this diversity in their output." There are also arguments against the pluralist ideas of the mass media. Marxists would argue against the idea of an equal access route to the control of the mass media. In order to buy a successful existing newspaper company you would have to pay millions. Most ordinary people simply do not have that amount of money. Also to start a newspaper company you need to have money. Also even if a minority group started up it would struggle to stay open against one of the large media companies, as it would be appealing to a smaller audience. Another argument is that media owners can try to control the output of the media, even if they are not successful. There are many examples of direct manipulation of the media by its owners. ...read more.

There are three forms of feminism, they are: Liberal Feminism, Radical feminism and Marxist/Socialist feminism. Liberal Feminism believe that social inequality is seen to have been introduced by stereotypes and gender socialization. In accordance to this the mass media is responsible, along with education and TV etc, for keeping these prejudices in our society today. They believe that if these ideas were removed and more positive images of women brought in to the media, then equality would begin to be developed. In order to achieve full equality this would need to be supported by law. Radical Feminism is the belief that female oppression is the direct result of a male dominated society. This usually results in the want to eradicate men from women's lives completely, resulting in lesbianism. It is the most extreme form of feminism; it is fully built on the foundation belief that men have a desire to control women. Marxist/Socialist feminism believes in discrimination, and that all types of ideological control benefit capitalism. It is not only sexism tied under this belief but class, sexuality, disability and ethnicity. After looking at several issues to do with the pluralist view on the mass media, I believe that this ideology gives us a reasonable amount of accuracy on how our media system works. Marxism and feminism both challenge this ideology; however they cannot challenge all of the pluralist ideas successfully. They simply do not hold the answers to some of the pluralist questions. ...read more.

This student has addressed the question with confidence. They have raised and tackled some very important and complex issues with clarity. It would have been even better if quotations had been referenced.
*****