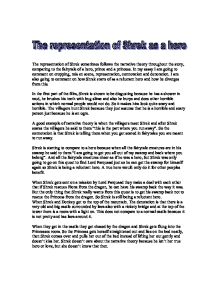 The representation of Shrek sometimes follows the narrative theory throughout the story, comparing to the fairytale of a hero, prince and a princess. In my essay I am going to comment on cropping, mis en scene, representation, connotation and denotation. I am also going to comment on how Shrek starts of as a reluctant hero and how he diverges from this. In the first part of the film, Shrek is shown to be disgusting because he has a shower in mud, he brushes his teeth with bug slime and also he burps and does other horrible actions in which normal people would not do. So it makes him look quite scary and horrible. The villagers hunt Shrek because they just assume that he is a horrible and scary person just because he is an ogre. A good example of narrative theory is when the villagers meet Shrek and after Shrek scares the villagers he said to them "this is the part where you run away". ...read more.

The denotation is that there is a very old and big castle surrounded by lava also with a rickety bridge and at the top of the tower there is a room with a light on. This does not compare to a normal castle because it is not pretty and has lava around it. When they get in the castle they get chased by the dragon and Shrek gets flung into the Princesses room. So the Princess gets herself straightened out and lies on the bed neatly, then Shrek comes over and pulls her out of the bed instead of lifting her out gently and doesn't kiss her. Shrek doesn't care about the narrative theory because he isn't her true hero or love, but she doesn't know that then. When they get down to the bottom of the castle Fiona realizes that Shrek hasn't slayed the dragon but the connotation is that, because that he isn't the real hero he doesn't have to follow the narrative theory. ...read more.

They both are getting on so well now because Fiona is becoming more like Shrek. She is burping and pushing Shrek also she is acting like a child, real Princesses don't act like that. Fiona and Donkey talk in the barn when it is just after sunset and Fiona has turned into an ogre and she said to Donkey "Who can go out with a hideous beast who is ugly". Shrek heard the conversation and he just assumed that they were talking about him because he is ugly and a hideous beast. I feel that they made Lord Farquaad little because he is not brave and he thinks little of people. He can't do things for himself. Fiona feels that she is trapped because in a fairytale the Princess is made to love her Prince Charming and live happily ever after. Shrek is different from most heroes because Shrek is very tall, fat, green, has disgusting habits, smells bad and lives in a swamp but normal heroes usually are quite tall slim, white, black, smell lovely and live in a palace. So Shrek is completely opposite to a hero in the sense of looks and personality. ...read more.