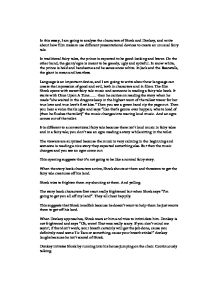 In Search For A Prince

In this essay, I am going to analyse the characters of Shrek and Donkey, and write about how film makers use different presentational devices to create an unusual fairy tale. In traditional fairy tales, the prince is expected to be good-looking and brave. On the other hand, the giant/ogre is meant to be greedy, ugly and spiteful. In snow white, the prince is bold and handsome and he saves snow white. In Jack and the Beanstalk, the giant is mean and heartless. Language is an important device, and I am going to write about how language can create the impression of good and evil, both in characters and in films. The film Shrek opens with sweet fairy tale music and someone is reading a fairy tale book. It starts with Once Upon A Time...... then he carries on reading the story when he reads "she waited in the dragons keep in the highest room of the tallest tower for her true love and true love's first kiss." Then you see a green hand rip the page out. Then you hear a voice that laughs and says "like that's gonna ever happen, what a load of (then he flushes the toilet)" the music changes into roaring loud music. And an ogre comes out of the toilet. ...read more.

When Shrek breaks into the castle to rescue Princess Fiona, he acts like an ogre when he shakes the princess to wake her up. She says "this be-ith our first meeting. Should it not be a wonderful, romantic moment? What are you doing? You should sweep me off my feet out yonder window and down a rope onto your valiant steed." This suggests that she has had a lot of time to plan this. Although Shrek appears to be violent, we learn that he has failed to slay the dragon because he says that it's on his "to do list" he just wants to get the job done. At the beginning of the film Shrek tries to threaten the characters that he meets, but Donkey, the mice, the storybook characters and Princess Fiona are not intimidated by Shrek or his appearance. He tries to make them frightened by reminding them that he is an ogre. Although Shrek is an ogre, he isn't frightening he is quite kind. In contrast to Shrek, Lord Farquaad is cruel. He watches the torture of the Gingerbread Man, and then when Lord Farquaad sees the torture he taunts the Gingerbread Man "RUN, RUN, RUN AS FAST AS YOU CAN". ...read more.

Afterwards they became good friends. They are good working as a team. Because Shrek puts up "beware" signs and he likes his privacy, but Donkey ignores them and makes friends. He also annoys Shrek. After analysing the character of Shrek and Lord Farquaad, I have come to the conclusion that although Shrek seems like a traditional ogre he isn't inside because he would have eaten everyone but he hasn't and he has friends. Also, he rescues a princess and you wouldn't see that written in a fairytale that an ogre rescues a princess and finds love and get married. Although Lord Farquaad looks like a Lord, his actions suggest that he is evil and he is actually nasty, he takes the Gingerbread Man's legs and tortures him. Steals Shrek's swamp to get what he wants. He also makes his knights fight Shrek. He can't do things for himself. In addition, he rejects the princess because he found out her secret that at sunset she turns into an ogre. He falsely claims to be king. He judges before he gets to know them. The story of Shrek uses presentational devices to reverse our expectations so that by the end of the film the viewer feels that Shrek is nice and kind and that Lord Farquaad is spiteful and horrible. Perhaps the message of the story is that you can't judge a book by its cover! ...read more.