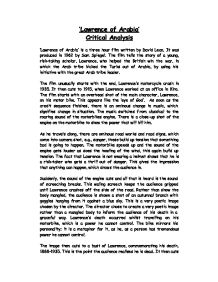 'Lawrence of Arabia' Critical Analysis 'Lawrence of Arabia' is a three hour film written by David Lean. It was produced in 1962 by Sam Spiegel. The film tells the story of a young, risk-taking scholar, Lawrence, who helped the British win the war, in which the Arab tribe kicked the Turks out of Arabia, by using his initiative with the great Arab tribe leader. The film unusually starts with the end, Lawrence's motorcycle crash in 1935. It then cuts to 1915, when Lawrence worked at an office in Kiro. The film starts with an overhead shot of the main character, Lawrence, on his motor bike. This appears like the 'eye of God'. As soon as the credit sequence finishes, there is an ominous change in music, which signifies change in situation. The music switches from classical to the roaring sound of the motorbikes engine. There is a close-up shot of the engine on the motorbike to show the power that will kill him. ...read more.

The director chose to create a very poetic image rather than a mangled body to inform the audience of his death in a graceful way. Lawrence's death occurred whilst travelling on his motorbike, which is a power he cannot control. The bike mirrors his personality; it is a metaphor for it, as he, as a person has tremendous power he cannot control. The image then cuts to a bust of Lawrence, commemorating his death, 1888-1935. This is the point the audience realises he is dead. It then cuts to two men who give the audience a little information about Lawrence, and the story begins to unfold. They say things like, 'He was the greatest man I ever knew.' The vicar of the cathedral then says 'That may be true but does he really deserve a place in here'. Here being St Paul's Cathedral, London, where saints, kings, and princes are buried and commemorated. ...read more.

A man hen asks 'does that not hurt', Lawrence replies,' Yeah, the trick is not minding it hurts.' This cool reply makes him across as cool and in-control. The film then cuts to Lawrence visiting the commanding officer to tell him about his plan to beat the Turks. He enters his office without saluting. This action shows the challenging, rebel-like side of Lawrence. It seems Lawrence constantly does odd things like this, to search for glory and to prove himself. This film cleverly draws the audience in. The film starts with the end of the film, Lawrence's death, the audience has no idea who this man is and what he did to have the right to buried at St Paul's cathedral and want to watch on in order to find out. It then switches to Lawrence's life as an officer and informs the audience about his plan to beat the Turks. The clever idea of starting the film with the end, dramatic camera shots and music, creates moods and dramatic affects which draw the audience in and keeps them gripped from start to finish. ...read more.