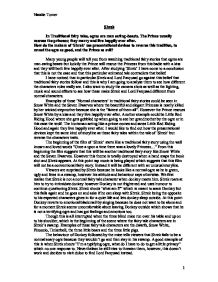 Shrek In Traditional fairy tales, ogres are man eating-beasts. The Prince usually rescues the princess; they marry and live happily ever after. How do the makers of 'Shrek' use presentational devices to reverse this tradition, to reveal the ogre as good, and the Prince as evil? Many young people will tell you from watching traditional fairy stories that ogres are man-eating beasts but luckily the Prince will rescue the Princess from this badie with a kiss and they will both live happily ever after. After studying 'Shrek' I have come to a conclusion that this is not the case and that this particular animated tale contradicts that belief. I have noticed that in particular Shrek and Lord Farquaad go against this belief that traditional fairy stories follow and this is why I am going to analyse them to see how different the characters roles really are. I also want to study the camera shots as well as the lighting, music and sound effects to see how these make Shrek and Lord Farquaad different from normal characters. Examples of these 'Normal characters' in traditional fairy stories could be seen in Snow White and the Seven Dwarves where the beautiful and elegant Princess is nearly killed by her wicked stepmother because she is the "fairest of them all". However the Prince rescues Snow White by a kiss and they live happily ever after. Another example could be Little Red Riding Hood where she gets gobbled up when going to see her grandmother by the ogre or in this case the wolf. ...read more.

The first scene with Lord Farquaad in shows him watching the torture of the gingerbread man. He then joins in by taunting him saying, "Run, run, run as fast as you can..." and by trying to pull Gingerbread mans buttons off. This in a traditional fairytale would be the other way around as Shrek would do the torturing and the Prince would do the rescuing. This is followed by a parody of Blind Date where Lord Farquaad has three beautiful women to choose from. He uses very formal language saying, "Beautiful fair flower Fiona will be the perfect bride for the perfect groom". This is very flattering but we have got to remember that he only wants to marry her for himself because he wants to be King plus this attitude soon changes when he sees Princess Fiona after sunset and orders his knights to arrest her. Overall in this film we quickly learn that the prince is not like a traditional fairytale character because instead of being charming, handsome and a hero he is in actual fact pure evil and only does things for his own benefit which also makes him selfish, spiteful and the bad person of this film. The makers of 'Shrek' use presentational devices to reverse the tradition of Lord Farquaad and Shrek, which I have just talked about. These devices are simple things like lighting and music but they all make a great difference to the characters appearance and attitude as well as the atmosphere of the scene. ...read more.

Donkey follows Shrek back to his swamp ignoring the 'Beware of ogre' sign and then he refuses to take Shrek's advice and leave him alone. This shows that Donkey is determined to make Friends with Shrek. He doesn't judge him from what people say he should be like, instead he finds out himself. By doing this Donkey shows us that Shrek is not a normal ogre and that he is a softhearted person. Not only does donkey bring out the real character of Shrek but he also makes the film funny. He lightens up the tournament in the courtyard by rolling the barrel into the knights and is always using sarcasm like when he returns after finding flowers to see Shrek and Princess Fiona smiling at each other. Without Donkey the story wouldn't end in the way it does because he acts as Shrek's advisor and Shrek listens to him when he is having difficulties. At the end Donkey tells Shrek to stop the wedding because he got the wrong impression when he overhears Princess Fiona talking. Donkey arranges it all and even has the dragon ready to fly them to the castle to save the Princess. Shrek is a good animated tale which is successful not just because of the characters and the storyline, but also because of the presentational devices such as the setting, lighting, music and sound effects that the makers use to influence the viewers. They are also used to reverse the tradition of fairytales where the ogres are man-eating beasts and where the Prince rescues the Princess, they marry and live happily ever after. Natalie Turner 1 ...read more.