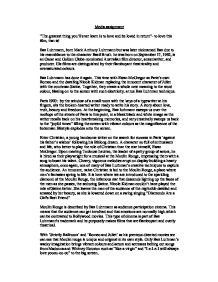 Media assignment "The greatest thing you'll ever learn is to love and be loved in return"- to love this film, that is! Baz Luhrmann, born Mark Anthony Luhrmann but was later nicknamed Baz due to his resemblance to the character Basil Brush. he was born on September 17, 1962, is an Oscar and Golden Globe-nominated Australian film director, screenwriter, and producer. His films are distinguished by their flamboyant theatricality and oversaturated colours. Baz Luhrmann has done it again. This time with Ewan McGregor as Paris's own Romeo and the dazzling Nicole Kidman replacing the innocent character of Juliet with the courtesan Satine. Together, they create a whole new meaning to the word colour, blazing on to the screen with such electricity, a true Baz Luhrman technique. ...read more.

Enter Christian, a young handsome writer on the search for success in Paris 'against his father's wishes' following his lifelong dream. A character so full of enthusiasm and life, who better to play the role of Christian than the star himself, Ewan McGregor. Upon meeting Toulouse Lautrec, the leader of a petty group of actors, he is hired as their playwright for a musical at the Moulin Rouge, impressing them with a song to boast his talent. Cheery, vigorous melodies erupt on display building a hearty atmosphere, once again, one of many of Baz Lurhman's creative techniques to capture the audience. An innocent, naive Christian is led to the Moulin Rouge, a place where men's fantasies spring to life. ...read more.

down on a swing singing "Diamonds Are a Girl's Best Friend" Moulin Rouge is described by Baz Luhrmann as audience participation cinema. This means that the audience can get involved and that emotions are normally high.which can be contrasted to Bollywood movies. This type of cinema is part of Baz Luhrmann's trademark and he purposely makes films that are flamboyant and overly theatrical. With 'Strictly Ballroom' and 'Romeo and Juliet' as his previous directed movies we can see that Moulin rouge is unique and original in its own style. Only Baz Lurhman's wacky imagination brings vibrant colours and actors and actresses belting out songs from Madonna and Whitney Houston such as "like a virgin" and "I-e-I-e-I will always love yooou-ou-ou" to the big screen.. ...read more.