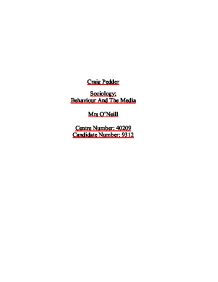 Behaviour And The Media.

Craig Pedder Sociology; Behaviour And The Media Mrs O'Neill Centre Number: 40209 Candidate Number: 9312 Behaviour And The Media I have chosen to do my coursework on connections between behaviour and the media, for example does violence in the media encourage people who view it to be violent? And does the media give the impression criminals often do not get caught. The topics I have chosen to do my study from are 'crime' and also 'the media'. I have chosen to do this study because I think it will be interesting to know what affects, if any, the media has on people's behaviour also it may give some insight into why people behave badly. So by doing this study I aim to find out if the media shows too much crime and if it is shown during inappropriate times in films and television programs. Questions I want answered in doing this are things such as how much of the media shows strong acts of deviance, what time do people watch television, how much television they watch and does this affect peoples behaviour. Research Methods Methods I am going to use to do my research are, * Covert observation - observing peoples behaviour as they come out of the cinema to see if their behaviour mimics of reflects the behaviour of the film they watched. ...read more.

how would you rate your behaviour" Observation When I was observing people coming out of the cinema I noticed a large amount of people, mostly males, acting out scenes from films, and particular stunts, both on friends and also unsuspecting members of the public who may or may not of known that their behaviour was mimicked from a film, this may cause the 'victim' to be led to the conclusion that it was an act of deviance on them. The behaviour between males and that of females coming out of the cinema was not much different but the attitudes taken to the behaviour of females was somewhat different that it was for males, people took the behaviour of males much more seriously than they did for females even though the levels and behaviour where on a similar scale, the consequences for the males was usually worse, the end result sometimes involved in security escorting people away from the area and one incident involved the police. Nothing like this happened involving females. This resulted in me thinking that many people in that area are biased and sexist because people such as security, cinema staff and staff at near by shops do not think of females as being deviant. ...read more.

My findings where as I expected in both my observation and in the results of my questionnaire. My findings where useful but not as useful as I would of thought I think this may be because my questionnaire was not very thorough, there could have been more questions and the questions where not very relevant to my research. My work does not back up any of the secondary data I collected I think this is because the data I collected was not linked directly to my research, and because of this comparisons between the research could not be made easily. If I was to do this research again I would do observations in different places instead of just one, this will make my data more reliable I would also give out questionnaires to a larger sample, again to make the data more reliable and to get more varied data. I think there are lots of parts of my research that could have been better the analysis of my results and my aims, I don't realy think there is a part of my work which could be chosen as being better than the rest. ...read more.