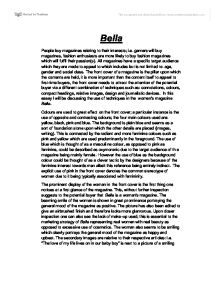 Bella - Magazine Front Cover Analysis. The prominent display of the woman in the front cover is the first thing one notices at a first glance of the magazine. This, without further inspection suggests to the potential buyer that Bella is a womans magaz

Bella People buy magazines relating to their interests; i.e. gamers will buy magazines, fashion enthusiasts are more likely to buy fashion magazines which will fulfil their passion(s). All magazines have a specific target audience which they are made to appeal to which includes but is not limited to: age, gender and social class. The front cover of a magazine is the pillar upon which the contents are held, it is more important than the content itself to appeal to first-time buyers, the front cover needs to attract the attention of the potential buyer via a different combination of techniques such as: connotations, colours, compact headings, relative images, design and journalistic devices. In this essay I will be discussing the use of techniques in the women's magazine Bella. Colours are used to great effect on the front cover; a particular instance is the use of opposite and contrasting colours; the four main colours used are: yellow, black, pink and blue. ...read more.

"The love of my life lives on in our baby boy" is next to a picture of a smiling mother and child hugging each other. Three out of the five secondary images all show young children, this reiterates Bella's target audience as including mothers and aspiring mothers and also portraying the maternal side of the magazine. The "before/after" image of a woman who has lost weight is relative to uphold the claim of "Get a flat tum in 6 weeks" which links with the stereotypical viewpoint that most women are insecure about their weight and looks; referring back to the picture of the smiling woman who is being sold off as perfect and what all women who purchase the magazine will achieve. The airbrushed presentation of clear face, glowing body, attractive smile and teeth is again set as a possible benchmark for buyers. From these connotations we can deduce that the target audience for Bella are women in their mid twenties to mid forties. ...read more.

This theme is also evident in "I watched my SUPERMAN fly past my window" and "We let doctors cut off his feet NOW HE CAN WALK" both using controversy and a maternal approach to attract the target audience. Another technique used to attract buyers is the use of competition: "�10,000 M&S lingerie GIVEAWAY", lingerie being a female item of clothing and �10,000 being a large sum of money, this is vital as it again focuses explicitly on the target audience of females. As I noted in my introduction, a front cover essential to a magazine's growth and is more important than the content for first-time buyers. A successful magazine cover would be one which uses all techniques at its disposal to its advantage through use of journalistic techniques, colours, images and linguistic devices to attract its target audience. In this instance the magazine Bella which is aimed at women uses feminine colours, feminine stereotypes, feminine pictures and common aspirations to attract its target audience. It effectively executes these media techniques to attract and maintain the attention and loyalty (through purchase) of its target audience. ...read more.