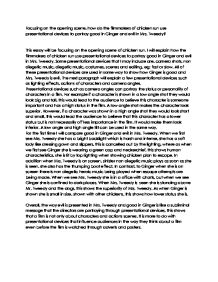 Focusing on the opening scene, how do the filmmakers of chicken run use presentational devices to portray good in Ginger and evil in Mrs. Tweedy?


This essay will be focusing on the opening scene of chicken run. I will explain how the filmmakers of chicken run use presentational devices to portray good in Ginger and evil in Mrs. Tweedy. Some presentational devices that I may include are, camera shots, non diegetic music, diegetic music, costumes, scenes and editing, eg: fast or slow. All of these presentational devices are used in some way to show how Ginger is good and Mrs. Tweedy is evil. The next paragraph will explain a few presentational devices such as lighting effects, actions of characters and camera angles.
Presentational devices such as camera angles can portray the status or personality of characters in a film. For example if a character is shown in a low angle shot they would look big and tall, this would lead to the audience to believe this character is someone important and has a high status in the film. A low angle shot makes the character look superior. However, if a character was shown in a high angle shot they would look short and small, this would lead the audience to believe that this character has a lower status but is not necessarily off less importance in the film. It would make them look inferior. A low angle and high angle tilt can be used in the same way.
For the first time I will compare good in Ginger and evil in Mrs. Tweedy. When we first see Mrs. Tweedy she has a bright backlight which is harsh and intense, she has a soft lady like dressing gown and slippers, this is cancelled out by the lighting, where as when we first see Ginger she is wearing a green cap and neckerchief, this shows human characteristics, she is lit by top lighting when showing chicken plan to escape. In addition when Mrs. Tweedy is on screen, sinister non diegetic music plays as soon as she is seen, she also has the thumping boot effect. In contrast, to Ginger when she is on screen there is non diegetic heroic music being played when escape attempts are being made. When we see Mrs. Tweedy she is in a office with charts, but when we see Ginger she is confined to dark places. When Mrs. Tweedy is  seen she is standing above Mr. Tweedy and the dogs, this shows the superiority of Mrs. Tweedy. As when Ginger is shown she is small in size, shown with other chickens, this shows how lower status she is.

Overall, the way evil is presented in Mrs. Tweedy and good in Ginger is like a subliminal message that the directors are portraying through presentational devices, this shows that a film is not only about characters and actions scenes. It is more to do with presentational devices that influence audiences in the way they think about a film even before the film is watched through adverts and posters.