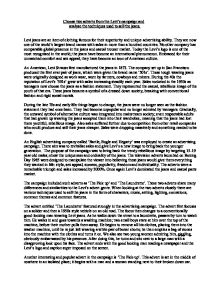 Choose two adverts from the Levi's campaign and analyse the techniques used to sell the jeans.

Choose two adverts from the Levi's campaign and analyse the techniques used to sell the jeans. Levi jeans are an item of clothing famous for their superiority and unique advertising ability. They are now one of the world's largest brand names with sales in more than a hundred countries. No other company has comparable global presence in the jeans and casual trouser market. Today the Levi's logo is one of the most recognised in the world; the jeans have become an international phenomenon. Embraced for their unmatched comfort and sex appeal, they have become an icon of American culture. An American, Levi Strauss first manufactured the jeans in 1873. The company set up in San Francisco produced the first ever pair of jeans, which were given the brand name '501s'. These tough wearing jeans were originally designed as work wear, worn by farmers, cowboys and miners. During the 40s the reputation of Levi's '501s' grew with sales increasing steadily each year. Sales rocketed in the 1950s as teenagers now choose the jeans as a fashion statement. They represented the casual, rebellious image of the youth of that era. These jeans became a symbol of a dressed down society, breaking with conventional fashion and rigid social morals. During the late 70s and early 80s things began to change, the jeans were no longer seen as the fashion statement they had once been. They had become unpopular and no longer admired by teenagers. Gradually, the outward symbol of alternative culture was integrated into mainstream society; even respectable adults that had grown up wearing the jeans accepted them into their wardrobes, meaning that the jeans had lost there youthful, rebellious image. Also sales suffered further due to competition from other retail companies who could produce and sell their jeans cheaper. Sales were dropping massively and something needed to be done. An English advertising company called 'Bartle, Bogle and Hegarty' was employed to create an advertising campaign. ...read more.

These focuses are done throughout the adverts to portray the quality and originality of the jeans. The viewer can see from certain camera angles that the jeans are tough wearing and are of the highest quality. Also these focuses are used to make the advert a bit sexier. The way they are used, they almost make the man look like a stripper when he removes his clothes. This does not only give the advert a sexy image but the jeans as well. This sort of focus had never been used before, which gives the advert and the jeans a rebellious image. In other camera shots characters are made to look less important than others do. The attractive characters are the most important in the adverts. They show this in the adverts by making the good-looking character be in front of the less attractive character. This can be seen in 'The Laundrette' when the good-looking man can be seen in front of the large old man. This shows that the large man is less important than the good-looking character. This is also done in 'The Pick-up'. Both tone and style play a big part in the Levi's adverts to intrigue the viewer. Both 'The Laundrette' and 'The Pick-up' seem to have quite a humorous tone. Due to the jeans target audience this is quite a good technique to use, as making the advert have a bit of a twist or be funnier will appeal to teenagers more. These types of adverts also make an impact on the viewer; it is more likely the advert will stay in their mind. 'The Pick-up' also has a romantic tone, as the man gets the girl. This adds more of a story line for the viewer to get into; it gives a happier ending satisfying the viewer. Levi's has its own unique style of adverts; this means throughout all the adverts in campaign there are the same common features, common themes and similar connotations. ...read more.

Using young men in the two adverts to wear the jeans appeals to the target audience more and it gives Levi's a youthful image. However the older generation are described quite differently. The viewer sees them as being dull and boring, always looking disapprovingly towards the younger men. Describing the young and old in this way gives the younger generation a rebellious image, resulting in the jeans becoming associated with it. Representation in the adverts results in giving Levi's a new image to appeal to its target audience. The advertising campaign was a great success, which can be seen by the sale increase. The adverts contain many techniques to sell the jeans. These include the use of a story line to intrigue the viewer; music to enforce the story line and act as a memory jogger; camera angles to portray the quality of the jeans; common features to create an atmosphere for the advert; common themes to produce an image for Levi's and connotations to manipulate the viewer. Both 'The Laundrette' and 'The Pick-up feature strongly in the campaign. 'The Laundrette' is one of Levi's most famous adverts, 'The Laundrette reached number 6 in a UK poll of 'The 100 greatest TV ads'' This shows the advert is very successful. Bartle, Bogle and Hegarty also have become very successful due to the campaign, with contracts with companies like 'Golden Wonder crisps', 'Coca cola' and 'Heinekens beer'. The achievement of the adverts can be seen in the sales of boxer shorts and music used in the adverts, '... no other advertising campaign in the history of television can claim to lead to as many #1 singles than Levi's' This shows the increase of sales of boxer shorts and music is due to the impact the adverts had on the viewers. The advertising campaign will remain in history forever due to its exceptional accomplishment, 'Bartle, Bogle and Hegarty were responsible for the Levi's campaign in 1985, one of the worlds most creative and durable advertising campaign.' By Stacey Hoyland ...read more.