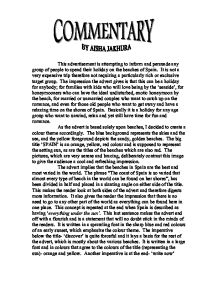 This advertisement is attempting to inform and persuade any group of people to spend their holiday on the beaches of Spain. It is not a very expensive trip therefore not requiring a particularly rich or exclusive target group. The impression the advert gives is that this can be a holiday for anybody; for families with kids who will love being by the 'seaside', for honeymooners who can have the ideal undisturbed, exotic honeymoon by the beach, for married or unmarried couples who want to catch up on the romance, and even for those old people who want to get away and have a relaxing time on the shores of Spain. Basically it is a holiday for any age group who want to unwind, relax and yet still have time for fun and romance. As the advert is based solely upon beaches, I decided to create a colour theme accordingly. The blue background represents the skies and the sea, and the yellow foreground depicts the sandy, golden beaches. ...read more.

Another imperative is at the end- 'write now' which is demanding the audience to write quickly as it implies a sense of urgency. There is also an offer of a free brochure to encourage people to write. The final statement 'If you think you know the beaches of Spain, think again.' is a continuation from the title 'Discover...' and it implies that there is such a variety of beaches that it is difficult to fathom unless you actually go and discover them yourself-and even then you can't think you know them as it is impossible to know them all. In the advert, there are descriptions of about eight different beaches. They are all given their original Spanish names that convey an essence of different cultures and traditions that would be especially appealing to the audience. The titles are written in a bright red font to match the colours of the sun. Furthermore the English translations which follow the Spanish titles make the beaches sound more fascinating and exotic e.g. ...read more.

To strengthen the language, devices have been used constantly. Examples of alliteration are: 'Swaying palm trees, pristine white sun-baked sands and blue seas' 'Added attraction' 'Fun-filled' 'Brilliant blue skies' 'Seven small islands' 'Superb sun-soaked beaches' 'Succession of seemingly endless sandy beaches' 'Equally lovely' 'Crystal clear' Examples of assonance are: 'Soft, golden sands' 'Gently sloping, honey-coloured' A number of metaphors/personifications are used: 'Running north, into the Costa del Azahar' 'The crystal clear water just demands a refreshing swim' ' The Atlantic has carved many rias' All these devices greatly enhance the effect of the language. The colour theme, the pictures, the various styles and fonts and the variety and devices of language all combined effectively together to reveal the best of the coast of Spain. A holiday that is not too expensive, offers a multitude of choices of different beaches and aims to provide a serene, pacific and refreshing atmosphere- as would be expected of a beach. It completes the overall aura of the advert in a very appealing way. ...read more.