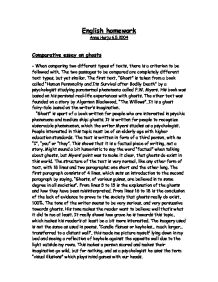 English homework Anna Harju 6.5.2004 Comparative essay on ghosts - When comparing two different types of texts, there is a criterion to be followed with. The two passages to be compared are completely different text types, but yet similar. The first text, "Ghost" is taken from a book called "Human Personality and Its Survival after Bodily Death" by a psychologist studying paranormal phenomena called F.W. Myers. His book was based on his personal real-life experiences with ghosts. The other text was founded on a story by Algernon Blackwood, "The Willows". It is a ghost fairy-tale based on the writer's imagination. "Ghost" is apart of a book written for people who are interested in psychic phenomena and medium ship; ghosts. It is written for people to recognize observable phenomenon, which the writer Myers studies as a psychologist. People interested in this topic must be of an elderly age with higher education standards. ...read more.

The vocabulary used is standard to a certain extent. Throughout the text there are some words that might not be familiar to all readers, but as mentioned before this book is aimed at highly educated people with high English vocabulary skills. Such as "manifestation", "guises", "dubious", "skeptical" and "perceptual". A lot of psychology vocabulary is used in this text, such as "visual illusions" and "perceptual". As it is a factual piece of writing, no rhymes, rhythms or sound effects were used. The language is very clear, as to be understood as a whole and apart from the vocabulary. The language is understandable and straightforward like factual pieces of writing should be. "The Willows" is a short story, also based on ghosts, but not on real life experiences. It is aimed for people who read ghosts stories and uncanny fiction. These stories are written to explore people's or the reader's imagination and open their minds to the mystical world of ghosts writers. ...read more.

"Coiling upon itself like smoke" definitely creates an image of a ghost, the see through smoke rising and curling. "icy fear that plucked the nerves out of their fleshy covering", this shows how scared the main character is in the text. It describes his sensation and interpretation of the Swede, which makes the reader feel that "icy fear" as well. The vocabulary used in this short story is of a very high standard English language. Words such "grubbing", "driftwood", "clutching", "gauze", "glance", "quivering", "acute", abominably" and so on, are not used in everyday language. The story is definitely aimed at professional literature readers with high vocabulary and understanding skills. The language could be described as the same as the vocabulary, as it is the same thing practically. In other words, the language is not easily understood by all readers. The two texts compared above are of course about the same topic, ghosts. But here we saw how they were completely different from each other, in terms of audience, purpose, language, vocabulary and so on. ...read more.