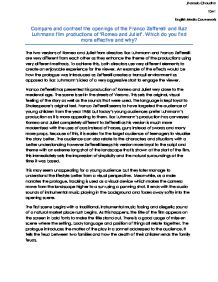 Compare and contrast the openings of the Franco Zefferelli and Baz Luhrmann film productions of 'Romeo and Juliet'. Which do you find more effective and why? The two versions of Romeo and Juliet from directors Baz Luhrmann and Franco Zefferelli are very different from each other as they enhance the theme of the productions using very different methods. To achieve this, both directors use very different elements to create an enjoyable experience for the viewer. An example of the effects would be how the prologue was introduced as Zefferelli creates a tranquil environment as opposed to Baz Luhrmann's idea of a very aggressive start to engage the viewer. Franco Zefferelli has presented his production of Romeo and Juliet very close to the medieval age. The scene is set in the streets of Verona. This sets the original, visual feeling of the story as well as the sounds that were used. The language is kept loyal to Shakespeare's original text. Franco Zefferelli seems to have targeted the audience of young children from the year 1968 but today's young audiences prefer Luhrmann's production as it is more appealing to them. Baz Luhrmann's production has conveyed Romeo and Juliet completely different to Zefferelli as his version is much more modernised with the uses of cars instead of horses, guns instead of swords and many more props. Because of this, it is easier for the target audience of teenagers to visualise the story better. ...read more.

In this version, the introduction makes the film look like more of an action movie than romance. The director of the 1996 production adds mise en scene and includes it as nuns at the petrol station for a comical effect. The scene of Verona beach varies from the Zefferelli production as the location for the movie is very different. Zefferelli takes more of a traditional approach by adding tension and creating a sense of danger for the audience by filming the scene in a public place, where it is busy and there are a lot of people. Zefferelli captures these quick shots of danger using a variety of shots to exaggerate the danger of the duel. The addition of mise en scene is critical for both directors as this allows the audience to set apart the age and location setting. Luhrmann wanted to add more comedy to the production to show that the Montague's did not care about their behaviour as it would increase the sense of danger for the dual as it was in a petrol station. In the 1996 version, adding comedy effects in the scene of the petrol station decreases the sense of danger so the viewer seems more comfortable with a background of the movie. Luhrmann presents the characters of the Montague house as hoodlums that wanted to pick a fight. The clothes they wear also show this. ...read more.

At the start, the scene shows helicopters to show that there is corruption and danger on Verona Beach. The non-diegetic sound gives the viewer a sense of discomfort and is used to let them know what they are going to experience throughout the film. The credits of Zefferelli's version, unlike Luhrmann's, is presented much calmer because he ensured that Verona' beauty was captured by the audience using a panning shot and then zooms into the sun for effect. The credits make the film appear old because of the style of fonts used. This aids the viewer to visualise themselves into another age. There was also a voiceover which introduced the prologue, this is a non-diegetic and the sound is parallel. Luhrmann presents the characters very differently compared to Luhrmann's version because they are described as punks, mainly due to their behaviour and this is shown by the way that they dress. The two directors tried to achieve a standard of detail and importance into the films. The elements I enjoyed about the Zefferelli version is that there is more authenticity in it as the director stayed loyal to the Shakespeare text and age that it was based in. Luhrmann's on the other hand, was working towards making Shakespeare more appealing to the younger generation using a more unique approach but Zefferelli was working towards his aim of keeping with the original content which is why various themes were applied. I think that Luhrmann's production is better as it is more appealing to people of my age range but still keeps perception of the Shakespeare story. ...read more.