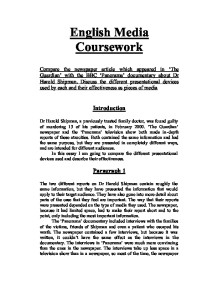 Compare the newspaper article which appeared in 'The Guardian' with the BBC 'Panorama' documentary about Dr Harold Shipman. Discuss the different presentational devices used by each and their effectiveness as pieces of media

English Media Coursework Compare the newspaper article which appeared in 'The Guardian' with the BBC 'Panorama' documentary about Dr Harold Shipman. Discuss the different presentational devices used by each and their effectiveness as pieces of media Introduction Dr Harold Shipman, a previously trusted family doctor, was found guilty of murdering 15 of his patients, in February 2000. 'The Guardian' newspaper and the 'Panorama' television show both made in-depth reports of these atrocities. Both contained the same information and had the same purpose, but they are presented in completely different ways, and are intended for different audiences. In this essay I am going to compare the different presentational devices used and describe their effectiveness. Paragraph 1 The two different reports on Dr Harold Shipman contain roughly the same information, but they have presented the information that would apply to their target audience. They have also gone into more detail about parts of the case that they feel are important. The way that their reports were presented depended on the type of media they used. The newspaper, because it had limited space, had to make their report short and to the point, only including the most important information. The 'Panorama' documentary included interviews with the families of the victims, friends of Shipman and even a patient who escaped his wrath. ...read more.

These are very affective, as the footage is done in a way where the video is not smooth, its jumpy, and it doesn't show all of Shipman's face. The actors in the reconstructions don't talk, the only sounds in the footage, are the dramatic music that is played throughput the whole documentary and the voice of the narrator. Also in the documentary are interviews with members of the police, asking them about what was going on during the case, and why they didn't do anything the first time he was investigated. The use of interviews is good, as they show the viewer other people's opinions and thoughts on Shipman and his doings. This reassures the audience that what the judge ruled was right, and what the documentary is saying about him is accurate. Paragraph 4 The tone of the television show is very serious. Throughout the show there is no humour at all. This was because the theme of the documentary was death, it would have been wrong to have included jokes, or any other kind of humour. The documentary included an interview with a policeman that was involved in the 1st investigation of Shipman. Somebody from the TV show was interrogating him over why he had not acted quicker when he had found suspicious evidence when investigating Shipman. ...read more.

Conclusion After reading through both 'The Guardian' newspaper article, and the 'Panorama' television documentary, I have come to the conclusion that the television documentary is much more effective. It included a much wider range of information, and showed coverage of the case right from when Shipman allegedly started killing off his patients. The information that it presents is presented in a very informative and effective way. It uses reconstructions of how Shipman is thought to have murdered his victims. There are also interviews with the family members of the deceased, and with friends and colleagues of Shipman. The voiceover in the program provides all the important information; he provides all the information in the newspaper article and more. I think what let the article down, is that it concentrated mainly on the final trial of Shipman. It didn't include much useful information about the murders. Even if the article was written by writers for 'The Sun' and was featured in that paper though, I still think that the television show would have been more effective. Television appeals to a huge audience of people, it's a part of people's lives. Newspapers such as 'The Guardian' are becoming a thing of the past, and are being wiped out by tabloids, magazines, television, and the Internet. ...read more.