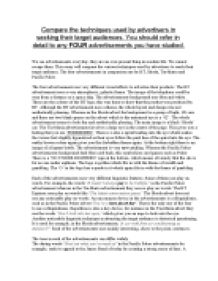 Compare the techniques used by advertisers in seeking their target audiencs

﻿Compare the techniques used by advertisers in seeking their target audiences. You should refer in detail to any FOUR advertisements you have studied. We see advertisements everyday; they are an ever-present thing in modern life. We cannot escape them. This essay will compare the various techniques used by advertisers to reach their target audience. The four advertisements in comparison are by BT, Skoda, Tia-Maria and Pacific Poker. The four advertisements use very different visual effects to advertise their products. The BT advertisement uses a very atmospheric, galactic theme. The image of the telephone could be seen from a distance as a space ship. The advertisements background uses blue and white. These are the colours of the BT logo; this was done to show that the product was produced by BT. ...read more.

There is a ?NO UNDER EIGHTEEN? sign at the bottom, which means obviously that the site is for no one under eighteen. The logo is golden which fits in with the theme of wealth and gambling. The ?O? in the logo has a spade in it which again fits in with the theme of gambling. Each of the advertisements uses very different linguistic features. Some of them use play on words. For example, the words ?It doesn?t always pay to be truthful.? in the Pacific Poker advertisement whereas in the Tia-Maria advertisement they use no play on words. The BT Equinox uses play on words like ?The latest conversation piece.? The Skoda advert does not use any noticeable play on words. An uncommon device in the advertisements is colloquialisms, such as in the Pacific Poker advert ?You?re a bare faced liar?. ...read more.

Meanwhile in the British Telecom advertisement they use of atmospheric colours and informal, informative language which would appeal most to a person with a taste for ?intergalactic objects?. The tone really affects the overall impression on the target audience. In conclusion, it would appear that the most effective feature in appealing to the right audience is the tone. This is because the tone tends to affect the whole feeling of the advert and really can differentiate the type of audience it is appealing to. In appealing to any audience it is not just about tone, it is also undeniably about the visual aspect of the advertisement. However the tone is probably more important, as we can distinguish in the British Telecom advert. Their use of vocabulary and their layout made the tone more appealing than that of the for example, Pacific Poker advert. ...read more.