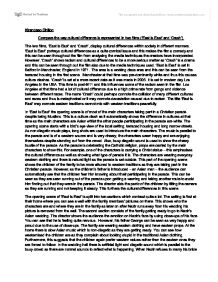 Compare the way cultural difference is represented in two films (East is East and Crash).

Kirandeep Dhillon Compare the way cultural difference is represented in two films ('East is East' and 'Crash'). The two films, 'East is East' and 'Crash', display cultural differences within society in different manners. 'East is East' portrays cultural differences as a quite comical issue and this makes the film a comedy and this can be seen throughout the film from analysing the media techniques the creators have incorporated. However, 'Crash' shows racism and cultural differences to be a more serious matter as 'Crash' is a drama and this can be seen through out the film also due to the media techniques used. 'East is East' is set in Salford in Manchester, England in 1971. The area is a working class area and this can be seen from the terraced housing in the first scene. Manchester at that time was pre-dominantly white and thus this causes culture clashes. 'Crash' is set at a more recent date as it was made in 2005. It is set in modern day Los Angeles in the USA. This time is post-9/11 and this influences some of the racism seen in the film. Los Angeles at that time had a lot of cultural difference due to a high crime rate from gangs and violence between different races. The name 'Crash' could perhaps connote the collision of many different cultures and races and thus is metaphorical or it may connote devastation caused due to racism. The title 'East is East' may connote eastern traditions cannot mix with western traditions peacefully. In 'East is East' the opening scene is of most of the main characters taking part in a Christian parade despite being Muslims. This is a culture clash as it automatically shows the difference in cultures at that time as the main characters are Asian whilst the other people participating in the parade are white. The opening scene starts with a bird's eye view of the local setting; terraced housing and long narrow streets. ...read more.

This ultimately shows that love can help. To make the audience feel shocked, they used a point of view shot of Farhad when he fires the bullet. They also show the locksmith's face; full of shock and agony however they do not show the little girl's face in order to conceal the fact that she is alright. To further to drama they use diegetic sound - the gun shot to add to the effect. In both films, many of the characters struggle to obtain power. In 'East is East', George, is constantly trying to make his children act in a more eastern manner. For example, as the family are Muslims, George forces the children to attend prayers at the Mosque, but instantly in the mid shot, you can see that the children do not like going there and feel quite alien which perhaps suggests that they have grown more comfortable to Christianity - this complements the opening scene as they are seen to be very cheerful as they participate in the Catholic parade. This leads to George not actually succeeding in his attempt to try to make his family more eastern as they simply reject the idea of Islam. Also in 'East is East', even though the children are Muslims, they still eat pork and Meena says that she looks 'stupid' in her eastern clothing which furthers the sense of discomfort the children have for their eastern heritage. This shows them to care little about their eastern and religious values and prefer a more western way of life and this indicates again how their father has failed to obtain power. Their father wants to get his children an arranged marriage which is a more eastern tradition. However, his sons do not want this to happen as they rebel; Tariq has a white girlfriend though she is kept secret. To show this concept, the camera speed tends to move quite fast as jump cuts are used when George is coming and Tariq is with his girlfriend. ...read more.

To add to this, non-diegetic sound is used; the song is called 'Moving' and is quite happy as the family realise they have each other and love one another. Although something bad has happened, Ella and George have made up and the film ends with the children having fun. Thus the song is parallel to the ending as its lyrics 'Moving, just keep moving' complement the film as the issue has almost been forgotten as if it happens on a regular basis. Overall, the ending scenes round off racism and give the same basic message about cultural difference; it is like a cycle. To conclude, although both films convey different settings and times they both give a similar message; racism is like a cycle, and it will never end. Also, another similarity is that it shows that different races and cultures can mix as human spirit can overcome prejudice and discrimination; however, what ever we do society will always remain a little racist. However, in 'East is East', not much change is shown in the characters lives mostly because it is a comedy film, yet in 'Crash' a lot of change can be seen as it is dramatic and this draws the audience closer to the characters as you feel as if you accompany them on their emotional journey. Despite this difference, 'East is East' and 'Crash' both incorporate the concept of older generations being more cultural e.g. in 'Crash' Farhad is more cultural than his daughter, Dorri who lives in a more western way, likewise, in 'East is East', George is much more traditional and cultural than his children who have been raised in the west. Overall, there is a mutual message which can be seen clearly. Both films show racism to be continuous and a part of life which often leads to sadness but can be confronted by love and human nature. Nonetheless, racism is a negative thing and both films have made it very clear that this is shown by showing emotions through the use of difference camera angles and sound. ...read more.